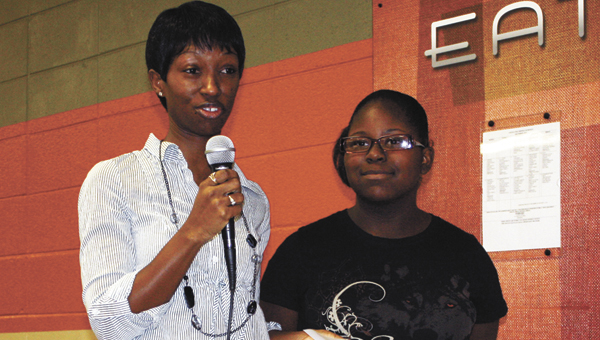 When Andalusia Middle School teacher Linda Kyle asked a group of sixth grade students to name one person in the community who has impacted their lives, many came to mind.

Those individuals were honored Tuesday at the semester’s AMS, “Friends of Education” tea.

Students recognized “friends” or individuals who have influenced them in countless ways, ranging from athletics to church leadership to picking them up from school and helping with homework.

The general consensus from those recognized was that they were happy to have a impact on the students, and the students are a joy to be around.

In total, an estimated 30 friends were recognized.

“I chose Mrs. Garian (Gooden) because she fixed all of our problems,” said Emily Dendy.

Sybil Weaver said she encourages Sadie Brown to do well in school.

Bowden complimented the boys on their character.

“If all kids had this kind of character, the world would be a much better place,” Bowden said.

Youth ministers and Sunday school teachers were also in the mix.

Ben Parker recognized Pennye Anderson for her dedication to his Sunday school.

“She always helps me when I need her.”

Shanasha Marshall recognized her sister, Shameka Davis, who is her role model.

“I try to instill in her that education is very important,” Davis said. “It’s important for you to stay in school.”

Kyle said that this program began six or seven years ago.

“We started it because we saw there was a need for kids to have a friend — someone they could talk to and look up to, other than mom and dad,” she said. “We know it’s a critical time during middle school. It can go up or down from here.”

Kyle said the community also has a considerable impact on who a child becomes.

“Research shows that it is inevitable that the community the child grows up in will influence who they become,” she said.