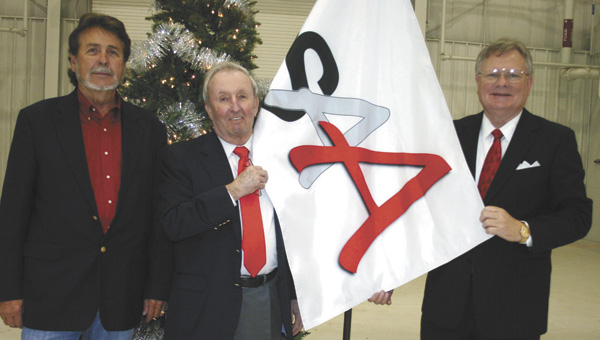 When the founder and CEO of Support Systems Associates, Inc., the parent company of the new Support Systems Andalusia Alabama, spoke at a reception for the company held at South Alabama Regional Airport yesterday, he knew more about the Andalusia community than many folks who live here.

Zoltak, who said he and his wife both grew up in mining communities in northeast Pennsylvania, talked about the community’s history, and noted several things he really likes.

“I love that you started this program with a Christian invocation,” he said.

Before yesterday, he had had a “windshield tour” of Andalusia, but had been sent photographs of the city’s Christmas decorations and of local manger scenes. He loved them.

“Your community still fosters the beliefs of the founding fathers,” Zoltak said. “And we are very proud to be a part of this community.”

Zoltak seemed equally eager to have the community get to know him.

“I started working when I was 7 years old as a laborer,” he said, adding that he held jobs in farming and construction before earning a degree in electrical engineering. The now 71-year-old is a proud father of two and grandfather of six, and also shared photos of his family, and his Christmas tree with the approximately 100 people who attended the reception.

He said his company “couldn’t find a more welcoming community or better home for our new business,” and said it’s a “great place to enable us to foster a new industry, achieve our goals and help raise young families.”

Action far outweighs words, Zoltak said, asking local residents to be patient as they get the new business off the ground. Corporate officials are busy getting all of the required certifications in place so that SSAA can bid on government contract work. Officials said they hope to see C-130s at the SARA by March.