Nearly 1 in 3 children in Covington County are living in poverty, based on the number of local residents now receiving food assistance. 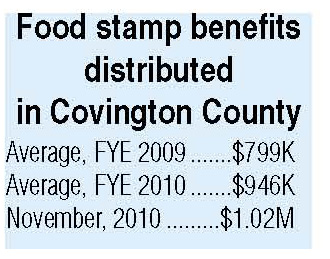 “Covington County has seen an increase in the number of persons receiving food assistance in the amount issued each month,” Leverington said. “Since the downward turn in the economy, we have experienced increased numbers of persons seeking assistance perhaps due to loss of employment and reduced work hours of wage earners.”

Leverington said with the economic impact everyone is facing, her department will probably see more applications for food assistance.

With the increase in the number of residents seeking food assistance, Leverington said it was no surprise to her that Covington County is ranked 17th highest out of 67 counties for child poverty, according to U.S. Census reports.

In fact, more than 32 percent of all children ages birth to 18, or 2,645 children, within the county are living in poverty. That figure is up from a little more than 25 percent in 2008.

Comparatively, surrounding counties such as Conecuh have 39.2 percent of children living in poverty, Butler has 38.7 percent, Geneva has 30.1 percent, Escambia has 29.9 percent, Crenshaw has 28.9 percent, and Coffee has 24.6 percent.