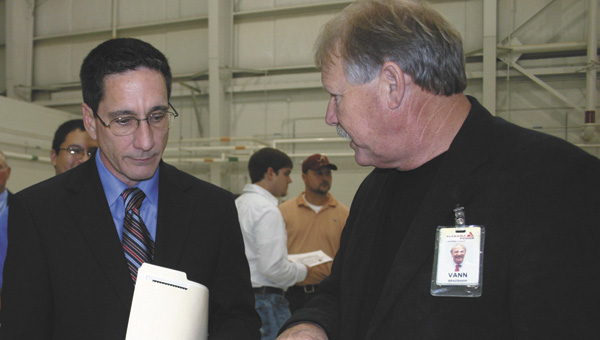 Both local leaders and the founder of the company who yesterday formally announced a new business for the South Alabama Regional Airport said the announcement is a great Christmas present for Covington County.

Support Systems Andalusia Alabama, LLC will be a maintenance, repair and overhaul (MR) organization. The company plans to hire approximately 50 employees to work in a previously vacant hangar at South Alabama Regional Airport.

A U.S. Department of Labor wage determination chart circulated by the company yesterday shows that the minimum pay will range from $12.37 per hour for an aircraft mechanic helper to $23.93 per hour for an electronics technician maintenance III.

“This is a day we’ve been looking forward to for a long time,” Andalusia Mayor Earl Johnson said. “It is a wonderful Christmas present for the people of Covington County.

“There is nothing you can do better than give people the opportunity of good jobs like those SSAI will provide here at South Alabama Regional Airport.”

SSAI is the parent company of SSAA, and was founded by John P. Zoltak in 1969. It has 12 other locations. (See box)

“This ain’t his first rodeo,” Johnson said of Zoltak.

Zoltak had high praise for the community.

“This is one of the finest aviation facilities in the United States,” he said of the facility SSAA will occupy. “You have everything here a company such as us could possibly want.

“Thank you to the leadership of the community and the citizens who have contributed their tax dollars to the bonds to build these facilities,” he said. You’ve done a great job and I think you for that.”

Zoltak said both the facility and the fact that all of Covington County is a HUBZone (Historically Underutilized Business Zone) made locating the new business here attractive.

HUBZone is a designation used by the federal government in awarding contracts. To qualify, 35 percent of a company’s employees must reside in a HUBZone.

Zoltak said his company’s prime contractor is the federal government and its largest customer is the Air Force Special Operations Forces located at Hurlbert Field.