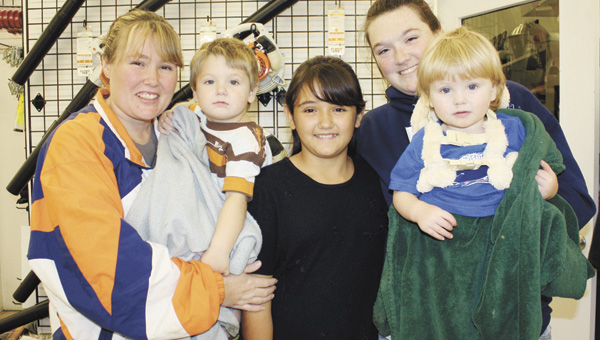 The Castillo family was the recipient of the grand prize in the “Cash for Kids” giveaway sponsored by J.R.’s Lawnmower Shop, WAMI and a host of other Opp area merchants.

Samson Elementary School student Nicole Castillo was one of more than 200 students who sent in letters telling why their families could use $500 this Christmas season.

“My mom is the only one taking care of us,” Nicole Castillo wrote about her mom, Amanda Castillo. “My nana tried to help, but she’s on a fixed income. Five years ago, Daddy went to heaven. Mama does her very best to make sure we have what we need. My sister and I do little jobs to make money to spend. We are very lucky to have a mom like we do.”

Nicole ended her letter by saying the children would buy something for their mom.

Even after winning the $500, Amanda Castillo was still putting her children’s needs and wants above her own.

“This is going to give them the opportunity to actually get more than what they usually get,” she said. “I have five children – three boys and two girls – and I’m a single mom, so it’s hard.”

The older three children’s father died five years ago, and even though, times are hard, the family is still thankful for what they have.

Second place winner Deidre Cheyenne is from the Red Level area and a student at McKenzie School. She wrote of how her family has no heat and other sacrifices made by her family.

“My mom had to quit her job to take care of my grandmother, who just had surgery,” she said. “My little brother’s birthday is right after Christmas. He probably won’t get anything, but I don’t want him not to have Christmas either.

“I don’t care if I don’t get anything as long as my brothers get Christmas,” she said.

“We need help,” she said in her letter. “We don’t have money for food.”

Joe Richburg, owner of J.R.’s, said he was pleased by the community’s effort.

“We let the State of Alabama know what a small town can do when we all pull together,” he said. “We received over $6,000 in donations. We’ve already distributed money across the county. We hope to help 50 to 75 homes when it’s all said and done.”