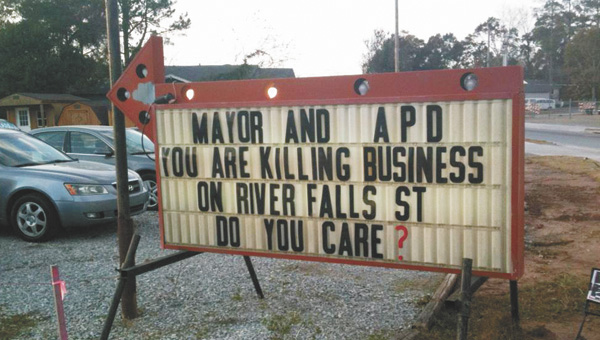 Shown is a sign placed on River Falls Street by a local business in light of construction on the street. | Courtesy photo

Andalusia Mayor Earl Johnson stressed this week that River Falls Street is closed to through-traffic, but open to those who live, work, or need to do business there.

A couple of weeks ago, Andalusia Police Chief Wilbur Williams announced his department would ticket drivers who used the yet-to-be-completed street as a through-street. Williams stated at the time that the action would be taken to protect those working on the project designed to improve the street.

But what many people heard was a different message: Simply that the street was closed. And that’s made some River Falls Street business owners complain loudly. One even put an angry message on the sign out front: “Mayor and APD: You are killing business on River Falls Street. Do you care?”

The answer is that they care very much.

“We want to make sure people understand that River Falls Street is closed to through-traffic, not to people who work there, live there or are doing business there.

“If you’re going to Ophelia’s and eat dinner and you get stopped, tell the police officer why,” Johnson said. “If you tell an obvious lie about that, you may get called on it.

“The point is we don’t want to shut those businesses there,” Johnson said. “We ask drivers to be careful, aware and cognizant of workers out there,” he said. “What has happened is, because a pretty good portion of the street is done, people think they can get on there and go. That’s not permissible.”

Johnson told council members Monday night that the project is at its approximate half-way point.

Long before construction began, announcements about the project included statements about it being a year-long project. Work began last summer.