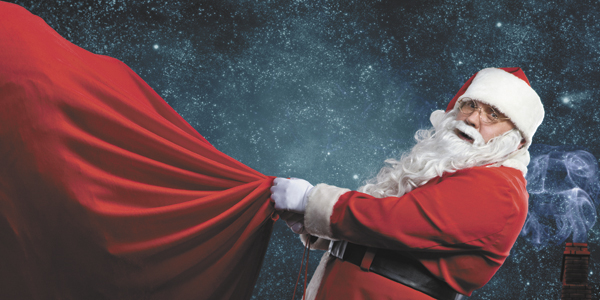 Find out where Santa is.

If little ones in your house are aching to know when Santa will be there, look no further than NORAD’s 2010 Santa Tracker, the site that tracks Santa’s latest location.

A tradition since 1955, tracking the plump, rosy-cheeked, jolly old elf riding in a sleigh is something many families across the globe look forward to each year.

In fact, not only can Santa be tracked using www.noradsanta.org, but Twitter, Facebook and Google maps all will have updates.

For those who don’t have access to the Web, call 877-HI-NORAD for real-time Santa Tracker updates.

We’re the only organization that has the technology, the qualifications, and the people to do it,” the Web site says. “And we love it! NORAD is honored to be Santa’s official tracker.”

Just when will Santa arrive?

Santa’s route usually starts at the International Date Line in the Pacific Ocean and travels west.

So, historically, Santa visits the South Pacific first, then New Zealand and Australia.

After that, he travels to Japan, Asia, Aftrica, Western Europe, Canada, the United States, Mexico and Central and South America.

“But keep in mind, Santa’s route can be affected by weather, so it’s really unpredictable,” officials said. “NORAD coordinates with Santa’s Elf launch staff to confirm his launch time, but from that point on, Santa calls the shots. We just track him.”

Just how does Santa travel the entire world within 24 hours?

“NORAD intelligence reports indicate that Santa does not experience time the way we do,” officials said. “His trip seems to take 24 hours to us, but to Santa it might last days, weeks or even months. Santa would not want to rush the important job of delivering presents to children and spreading joy to everyone, so the only logical conclusion is that Santa somehow functions within his own time-space continuum.”

If I could only have 3 gifts, I’d choose…