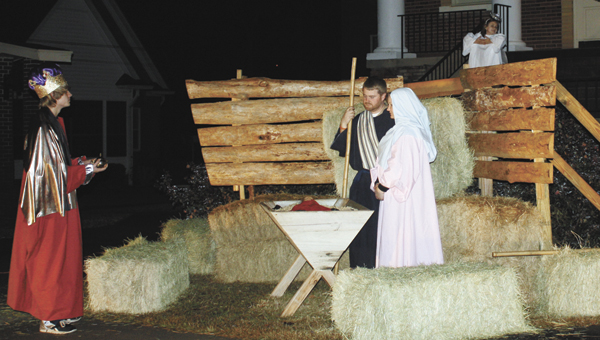 The birth of Christ is the reason for the season, as this local nativity scene demonstrates. | File photo

Local ministers emphasize that the true meaning of Christmas is not about the presents under the tree, it’s about the greatest gift of all – God’s gift of his son to save the world.

“Christmas is a reminder of God’s gift to mankind — Jesus,” he said. “God’s gift of His son Jesus is an expression of His love for you.

Karthaus reminds residents of the message the angel said that first Christmas morning.

“Do not be afraid. For I bring to you good news of great joy that will be for all people.”

“We celebrate God’s gift to us because it is personal from the angel, said ‘For I bring to you,’” he said. “It is positive the angel reminds us that it’s good news. And it’s universal, mean for all people.”

The Rev. Dale Sallans, minister at Andalusia’s First Presbyterian, said he is reminded this season, as he is every season, that Christ came and will come again.

“As we celebrate his first coming, we must think to his second coming,” he said. “We shouldn’t worry with when he is returning, but be sure we are ready when he does make his return.”

Fr. Anthony Pullukattu, of Christ the King Catholic Church, said Christmas is about celebrating the “incarnation of Jesus.”

“This is important because God sent his son to save the humanity from the bondage of sin,” he said. “That is the purpose of God. He became a man and became one among us, and at the same time, he wanted us to be one with him. That makes it a more meaningful celebration of his birth.”

Pullukattu said while the world facing difficulties, God sent Jesus to this world because he wanted to save the problems by becoming one with humanity.

“We should pursue God to work for the solution,” he said. “God reveals his love through his incarnation.”

Pullukattu said that when a person is facing difficulty, and another helps him, that’s the best example of love.

“The same can be said for God,” he said. “It makes us responsible to share God’s love to the world. We are called and are given the mission to share his love. This is the celebration of Christmas, but we need to focus on becoming an instrument of God. It’s an important part of Christmas.”