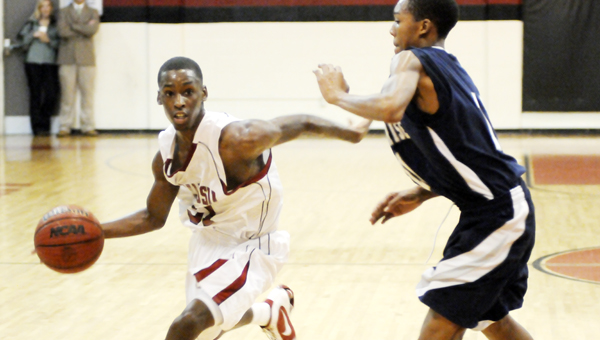 Despite having to start against Class 6A Jeff Davis at the Ozark Holiday Shoot Out next week, Andalusia boys basketball coach Richard Robertson said the focus right now is on his third-ranked Bulldogs.

“Then the start of next week, we’ll start working on Jeff Davis,” he said.

The tournament will take place from Dec. 28-20 at the Ozark Civic Center, and each team in the eight-team field will play three games each. There is a winner’s and loser’s bracket.

The Bulldogs’ first game against Jeff Davis will be at 7 p.m. on Tues., Dec. 28. The other teams in the tournament are Carroll-Ozark, New Brockton, Luverne, Brantley, Pike County and Charles Henderson.

To get ready for the shoot out, the Bulldogs will be working on correcting the many deficiencies on the team, Robertson said.

“We’ve got to try to get our mind set that we want,” Robertson said. “A lot of folks think that when you win, it’s fine, but what a lot of folks don’t realize is that there are a lot of things we need to work on to get to the point where we need to be.”

Andalusia improved to 14-1 on the season after defeating Houston Academy 80-55 on Saturday in Dothan. The Bulldogs’ only loss came to Kendrick, Ga. at the Enterprise Wildcats Thanksgiving Tourney.

Robertson said in order to be successful next week in Ozark, the team must execute the game plan, which they didn’t do against Kendrick.

“We’ve got to do the things according to the script, not what you think you might do,” he said. “That’s the biggest thing. If you’re playing an opponent that’s making as many mistakes as you, it might not matter.

“But whenever you get against a good basketball team and they’re executing their plan to the fullest — that’s what happened against Kendrick,” he said.

Getting the first win over Jeff Davis is crucial for the team, Robertson said.