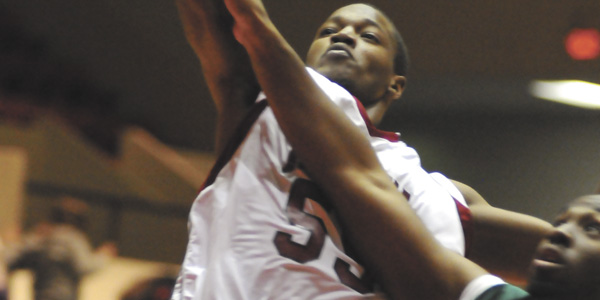 OZARK — Andalusia’s Jacard Townsend led the Bulldogs with a double-double to help lift his team to a 71-66 victory over Jeff Davis on Tuesday night at the Ozark Holiday Shoot Out.

Townsend led the Bulldogs with 18 points and 10 rebounds.

Additionally, Derrick King scored 16 points and was 10-of-13 from the free throw line, and the Bulldogs were 21-of-29 in free throws.

“They were very important,” Robertson said. “We’re fortunate to get out of it, but we played the last minute and a half with our preserving plan. We got the ball in the free throw shooters’ hands, and converted.

“Jeff Davis has a good basketball team, and I’m not taking anything away from them,” he said. “We should have had a better cushion at the end. We broke down on our coverage, and we went into a junk defense.”

The Bulldogs improve to 15-1, and will play Charles Henderson tonight at 7 at the Ozark Civic Center.

Quayshaun Denson also had a good night from the line, shooting 5-of-5. He finished the night with 11 points.

On the inside game, the Bullogs dominated on the boards with the help of Townsend, who made most of his points on put backs.

Jeff Davis had a hot start in the second half, making baskets on transition and quickly took a 37-34 lead early in the third period.

The Bulldogs jump-started their inside offensive game against the Volunteers, making precise passes to the big men in the middle.

Jeff Davis tied the game up 46-46 at the end of the third quarter on a tres.

Driving to the basket and causing three-point plays was the name of the game for Andalusia in the fourth period.

King made eight of his free throws in the final period.

Sitting at a comfortable 54-47 lead, the Bulldogs let up on defense, allowing the Volunteers to come back to within three points at 64-61 with 1:33 left on the clock.

King helped his team take a 65-63 lead on a free throw. Jeff Davis took possession and tried for a tres, but the ball rimmed out and Andalusia got the rebound.

It was déjà vu for King, who found himself at the line again, where he made it a two-possession game with 25 seconds left.

King sealed the win for the Bulldogs with two additional free throws at the end after he was fouled.

Robertson said despite the win, the team must play better if they want to win the tournament.

“We’ve got to become more polished and play a lot smarter in one phase of the game — in ball handling,” he said. “We want to play in the championship bracket. We might not win it, but the lowest place we can finish is fourth. Fourth is better than fifth, but we want to win it.”

Jeff Davis led 13-11 at the end of a sloppy first period by Andalusia.