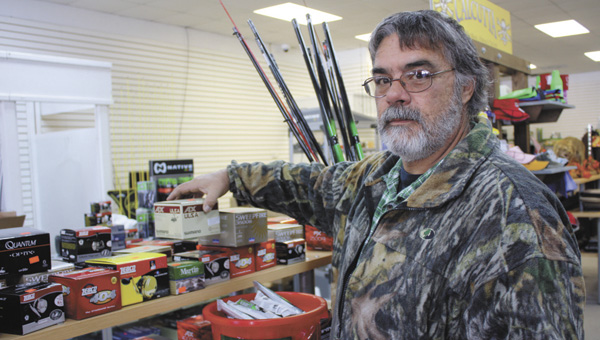 Ask any hunter or fisherman and he’ll tell you his love of the outdoor isn’t just a hobby, it’s a lifestyle.

John Tisdale, owner of the store, which located in the old Factory Connection building, said the storefront is “a taste of things to come” and features everything needed to maximize an experience in the great outdoors. “This is a starter store for us,” Tisdale said of the 4,500 square-foot location. “We intend to build out in the neighborhood of 20,000 square-foot within the next six months.”

At present, the store offers the items one would associate with a sporting goods store – with the exception of firearms.

“We’ve got what you need for freshwater and saltwater fishing – reels, lures,” Tisdale said. “We’ve even got some marine items for boats. For hunters, we’ve got camouflage and everything you need. We’re going to wait until we get to our permanent location before carrying firearms.”

Currently, the store employs three; however, that number will increase to 25 once the new location is complete, he said.

Store hours are Monday through Saturday from 9 a.m. until 6 p.m.

Tisdale said his original plan was to locate the store inside the old Goody’s location, but that changed when he began negotiations with a national retailer for the spot.

He wouldn’t give any hints as to the name of the retailer but did say he would make an announcement as soon as a lease was signed for the location.

Currently, Tisdale is also preparing to open a new restaurant between the new Sporting Lifestyles store and the old Goody’s building.

“I’ve always got projects going on,” he said. “This place, which is in the old Mendoza’s spot, will be a full-size, sit-down restaurant. (These ventures are) just a taste of things to come.”