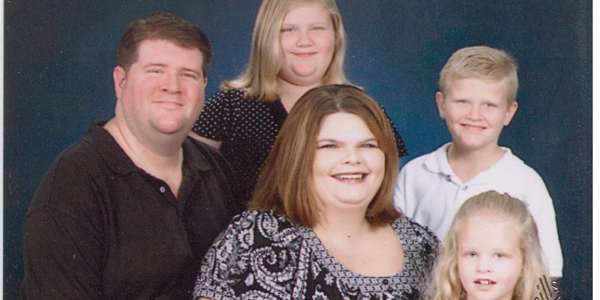 Amanda Bradley is shown with her husband, Chris, and three children -- Sara, Evan and Emily.

Even though the presents are all unwrapped, local residents have the opportunity to give one more gift – and it could be one that saves Amanda Bradley’s life.

Bradley, an Andalusia native, was recently diagnosed with aplastic anemia, a condition in which her body’s blood-producing bone marrow has shut down.

Her only option for survive is to receive a bone marrow transplant.

To help her find a suitable donor, a drive is set for Sat., Jan. 1, at the PowerSouth board room.

“This means her life,” Kathryn Williamson, Bradley’s mother, said. “She’s got to have a bone marrow transplant, that’s what we’re depending on. Right now, we’re receiving blood transfusions several time a week.”

Williamson said Bradley got sick on Oct. 19 and went to the doctor, who diagnosed her with human parvovirus, more commonly known as the fifth disease. The most prominent symptom of parvovirus infection in adults is joint soreness lasting days to weeks. Joints most commonly affected are the hands, wrists, knees and ankles.

“They treated that and after that she developed the aplastic anemia,” she said.

Anemia is a condition in which red blood cells, which carry oxygen to all the parts of the body, are used up faster than the bone marrow can replace them. Parvovirus infection in people with anemia may stop the production of red blood cells and cause an anemia crisis. People with sickle cell anemia are at particular risk.

Originally, family and friends hoped Bradley’s brother would be a match, but he wasn’t.

So now Williamson and Kay Ingram, a friend of Kathryn’s and fellow educator, have organized the bone marrow drive for the 33-year-old mother of three.

“I teach with Kathryn, who’s a teacher’s aid at AES,” Ingram said. “We were talking, and we did one previously at our church for Jill Spann Andrews years ago, and I just said to her ‘we can have a bone marrow drive.’ And here we are.”

Ingram said the procedure to see if one is a match is simple.

“It’s just a swab in the cheek, and it only takes a minute or two for the swabbing,” she said. “It’s a way for people to come and see if they are a match. They’ll send it off to the bone marrow registry for results.”

Transplant matches are based on genetics, so the search begins within a family; however, 70 percent of those needing a match aren’t able to find a related donor.

They turn to the national “Be the Match” registry, which has more than 8 million potential donors in the U.S. who have been tested and have volunteered to donate if needed.

Local donors’ samples will be recorded into that registry.

For those who worry the donation might interfere with their ballgame watching, that won’t be the case.

Ingram said there will be a big screen TV to show the Alabama vs. Michigan State bowl game.