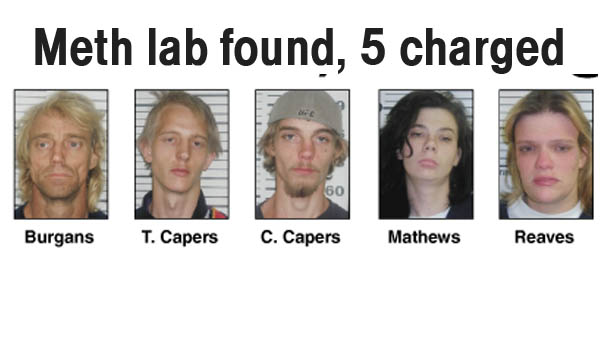 A call over a loved one’s well being led to the discovery of a meth lab and the arrest of five people Tuesday.

Chief Deputy David Anderson said Wednesday that deputies were called to a home on Starlight Lane, located just off Hog Foot Road, to perform a “welfare check” on an individual.

He said Drug Task Force agents were then contacted.

“During a search of the residence, deputies and DTF agents recovered numerous containers of what appeared to be meth, numerous precursor chemicals, smoking devices and marijuana,” he said.

In addition, Mathews was charged with giving false information to a law enforcement officer, which carries an additional $3,000 bond. She also had an outstanding warrant for failure to appear from the Andalusia Police Department.