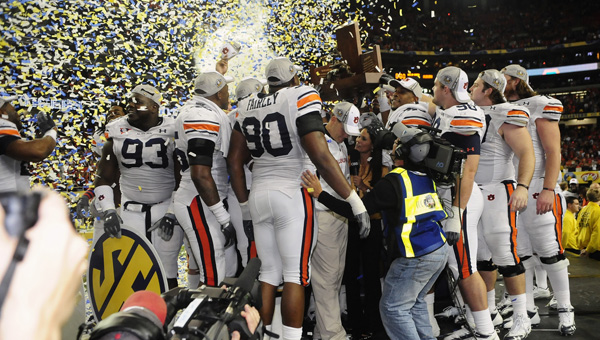 The Alabama Bureau of Tourism promoted 2010 as the year of downtowns and small towns.

And indeed, Andalusia celebrated it, with a four-day period in November chocked full of events.

But when we asked our readers to vote on the top stories of 2010 earlier this week, one thing was clear: In your minds, 2010 will be remembered as the year of sports, or perhaps the year of snow.

Here are the top 10 stories of 2010, as chosen by our readers (Note, readers could vote more than once, so numbers won’t add to 100 percent):

Auburn University went undefeated in the 2010 regular season and won the SEC championship in December to advance to the BCS National Championship game against No. 2 Oregon in Arizona on Mon., Jan. 10.

The powdery white stuff blanketed the county on Fri., Feb. 12, 2010. On Dec. 8, county residents again watched snow fall, this time for about an hour, although there was no accumulation. The same was true on Christmas Day, when flakes again fell.

Aaron was employed as a minister when he was arrested in October of 2009 for sexually abusing and sodomizing four boys. He pleaded guilty in early February and will spend the rest of his life in prison after receiving four life sentences. He was 54 at the time of his arrest.

In July, John Curtis Davis, 25, was charged with and confessed to killing his 4-year-old nephew. Davis is accused of shooting the boy with a pellet gun after the boy dropped a toy on his toe.

Three local businessmen were indicted in Pennsylvania in November for their parts in allegedly stealing $53 million in a massive loan fraud scheme. John Tomberlin and Harold Young, both associated with Andalusia’s South Central Agency, and John Wiley Spann, a logging equipment dealer, have been arraigned and will head to trial in January.They are alleged to have participated in the fraud at the request of officials with Sterling Financial Corp’s Equipment Finance LLC, based in Pennsylvania. The three locals were ordered to forfeit $1,041,452.92.

An April 20 explosion on the Deepwater Horizon rig killed 11 workers and sent crude oil gushing into the Gulf of Mexico for months. The spill hampered tourism, shut down fishing, and made a mess in the sands on the coast.

In December, Support Systems Andalusia Alabama, a subsidiary of SSAI, announced its plans to provide maintenance, repairs and overhauls for C130s at the South Alabama Regional Airport. The company expects to hire 50 employees.

An estimated 11,000 people attended a November air show at South Alabama Regional Airport, an event that coincided with Homecoming 2010. The homecoming included a tribute to veterans, an art show, walking tours, quilt show, book signing, and a gala.