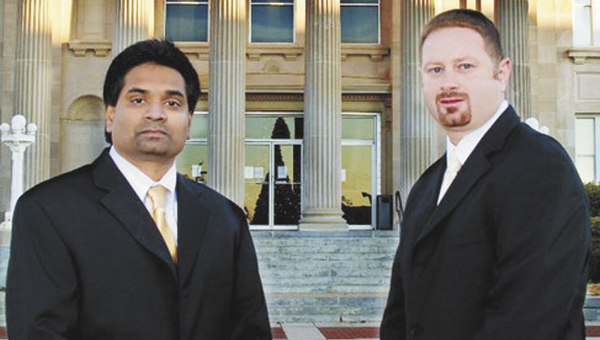 The sale of a piece of downtown real estate has led to a domino effect on the local business front.

The property, which currently houses C.J.’s Grille, has been sold to attorneys Manish Patel and Chris Sledge.

The two, who recently ended an eight-year partnership with Allan Woodard and Woodard, Patel and Sledge, opened up their own practice on Dec. 27, at a small storefront on U.S. Hwy. 29 North near Tiny Tots.

Sledge said Wednesday the remodel of their new location will begin as soon as the building is vacated.

“We’re thinking about two months,” Sledge said of the work at the new location. “We were ready to go out on our own, and this was a perfect opportunity.”

Sledge said the move was a “lifelong dream” for the two.

“A lot of people may not realize it, but Manish and I have been best friends since the fourth grade at Straughn Elementary,” he said. “We transferred in two months apart.

“We were in the eighth grade when we decided we wanted to be lawyers together.”

The two spent their post-secondary education together at Auburn before branching out to different law schools – Sledge, the Oklahoma City University’s School of Law, and Patel, the Mississippi College’s School of Law.

After law school, both came back to Andalusia. Patel opened a solo practice, and Sledge worked as an associate with James and James Attorneys.

After a year, the two joined the then-Woodard Law Firm.

Now, the two plan to continue their dream and are specializing in personal injury, civil litigation and general legal matters. Their office is open Monday through Friday from 8 a.m. until 5 p.m. They may be reached at 222-2255.

However, with their new office opening, it means that C.J.’s Grille will have to find a new home.

C.J’s owner Casey Jones said he is in negotiations with the owners of an already established restaurant location in Andalusia. He hopes to close the deal within the next few weeks, he said.