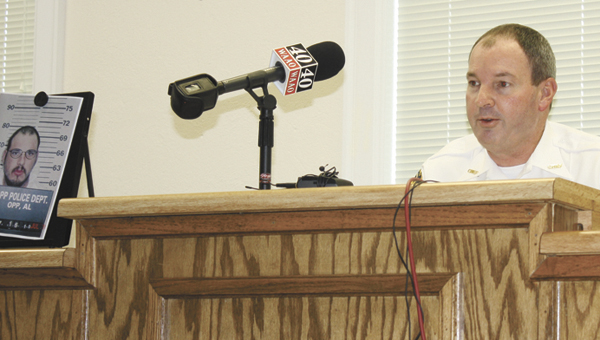 Opp Police Chief Nickey Carnley speaks at a press conference after the July murder of a 4-year-old. The accused uncle is expected to be appointed counsel next week. | File photo

Circuit Judge Charles A. “Lex” Short is expected to appoint counsel to a laundry list of accused Wednesday, including the man charged in the shooting death of his 4-year-old nephew and a father who allegedly abused his child with an iron and bamboo cane.

John Curtis Davis of Opp is charged with capital murder and first-degree domestic violence after allegedly shooting Curtis Alexander Ruede point-blank in the chest with an air rifle at a West Cummings Avenue home in Opp, where the two lived with Davis’ mother, in July.

Witness reports said Davis shot Ruede when the child dropped a toy on Davis’ foot. Davis has confessed to the shooting to law enforcement but has not had a preliminary hearing on the case.

Also on the call docket is the case against Jerry Cowan.

Cowan was arrested by the Andalusia Police Department in September after it was discovered he allegedly used a steam iron, bamboo walking cane and other items to abuse the child.

Both Curtis and Cowan remain in the Covington County Jail.

Also included on the call docket for the appointment of counsel are:

• Amanda Lynn Cook, who is accused of having inappropriate relations with a 15-year-old boy while at Pt. A Park.

• Devon Dray Vaughn, who is charged with second-degree rape after allegedly confessing to a consensual sexual relationship with a 15-year-old girl.

• Jermaine Pate and Tiffany Ann Riley, the Andalusia couple charged with allegedly breaking Riley’s 1-year-old daughter’s arm in three places and locking her in a bathroom to keep from “hearing the crying.”

• Jeremy Gibson, who is accused of causing his then- 7-week-old daughter to have “shaken baby syndrome” in May; and

• 27 other defendants for cases including theft of property, drug-related possession, forgery, burglary, unlawful breaking and entering of a motor vehicle, criminal mischief and criminal notification act.

At least two defendants in separate cases are scheduled for arraignments, including William Kendall Adams, an Andalusia man accused of molesting his step-granddaughter five years ago. Adams was indicted by the grand jury in December and charged with first-degree sexual abuse and sodomy, endangering the welfare of a child and furnishing alcohol to a minor.