Piece of history added to museum 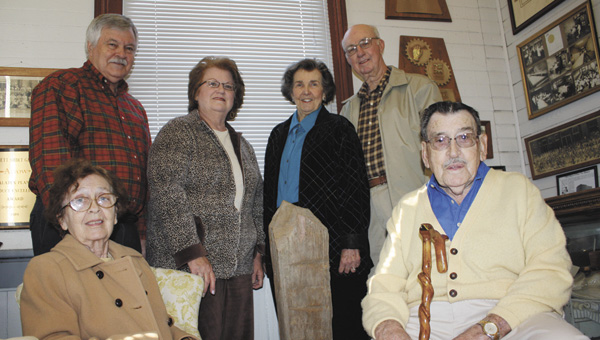 Another piece of history was installed in the Three Notch Museum Thursday – a “Three Notch Post.”

Donated by Sue and Robert Hamilton of Opp, the lighter-wood post was a piece of the estate of Samuel “Marlin” Hamilton, Robert’s brother. It was discovered in a shed on Marlin’s Opp property.

Known for his philanthropic ways around Opp, Marlin spent his time helping beautify the city – even going so far as to plant and water the dogwood trees down residential boulevards, family said.

Marlin flew a Liberator airplane during World War II, was shot down over Munich, Germany, and was a prisoner of war for eight months. While in the military, he earned the rank of quarter master general. After the war and until the time of his death at the age of 64, he taught mathematics at the MacArthur State Technical School, which is now known as Lurleen B. Wallace Community College, MacArthur campus.

He was also a collector, his brother Robert said.

“Among his possessions, we found an old English musket and this Three-Notch post that might be an original,” Robert said. “We think it is. There is also a collection of his at Maxwell Air Force Base in Montgomery, and a 6-foot granite marker honoring him in front of Opp’s Chamber of Commerce.

“In thinking about it, Marlin would be so proud to know that his post is here in this museum,” Robert said of the day’s donation.

The public is invited to view the post at its new home at the museum on Central Street in Andalusia Monday through Saturday from 9 a.m. to 3 p.m. and Sundays from 2 p.m. to 4 p.m.

OCAC kicks of 2011 with new classes