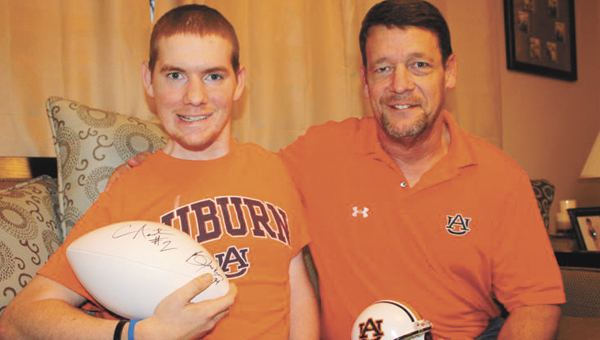 Sure, he woke up from a coma, has learned to talk again and can move his once-paralyzed arm and leg.

But, in his opinion, what really makes him really lucky is his Christmas present – tickets to the football event of the year – the BCS championship game between Auburn and Oregon.

In Dec. 2009, he was traveling from Andalusia to Florala when his pickup truck hydroplaned and struck a tree. For seven months, family members waited and wondered when or if Rasberry would ever waken.

On May 25, their prayers were answered. He woke. His first word, “Why?”

Since then, his family – dad Joe, brother Jonathan, mom Laurie and others – have pushed Rasberry and themselves to ask, “Why not?”

“We take it one day at a time,” said Joe, a teacher at Paxton High School. The two live at their home in Florala. “Six months ago, he couldn’t speak, lift his legs or his arms. He is in a wheelchair, but now, he’s standing – even walking some with the help of a walker.”

To say the family is deeply rooted in their support of Auburn would be an understatement.

Joe’s dad is an Auburn graduate. So are Joe and his sister. So is Jonathan.

“The thing about loving Auburn is that those who do seem to have a connection with something there,” Joe said. “For us, it started with my dad. He loved Auburn, loved Auburn football.”

And it was a love of family that led the whole Rasberry clan on their journey to Glendale, Ariz., site of this year’s championship.

“Jonathan and Kim (his wife) got tickets way back when,” he said. “I thought, well maybe we can have a party here at the house and try to find them on TV.

“Then I thought well, maybe we could all go, but I knew it would be difficult with Tyler’s condition,” he said. “Sitting here, I remembered something they told us at The Shepherd Center (the Atlanta rehab unit where Rasberry received care).

“They told us actions can change your life, and it’s not always for the worse,” he said. “It’s the little things that make a difference. Being handicapped should never be a deterrent from doing something. Sure, he can’t do a lot of the things he used to could do, but us going to the game could be my way of showing him that life is just beginning.

He began the process of locating handicap tickets, which is exactly as difficult as it sounds. There’re only about 60 available.

“And that’s not a lot to go around, believe me,” he said.

Then, the day before Christmas, he got the news. They had the tickets.

Tyler had spent the day with his mother, and when he returned home, Joe had two surprises waiting on him.

“I had the itinerary stuffed into Auburn helmet and a football signed by Cam Newton and Bo Jackson,” Joe said. “We’re going to take it to Birmingham and get Pat Sullivan to sign it. Then, we’ll have of Auburn’s Heisman winners on it.”

However, there were a few rough patches in getting a departure plan in place. Jonathan and his wife were two of the unfortunate ones caught up in the Events Worldwide ticket debacle, where the ticket supplier couldn’t fulfill its ticket orders.

Flights to Arizona were sold out.

But, in the end, it seems like things work out for the Rasberry family.

Joe and Tyler scored an all-inclusive package that got them a flight and a hotel. The two will fly out today and return on Wednesday.

The Wildlife and Freshwater Fisheries Division (WFF) of the Alabama Department of Conservation and Natural Resources (ADCNR) is currently accepting... read more