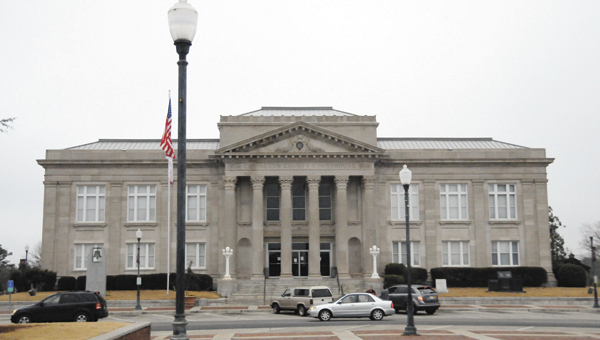 Although Covington County escaped the brunt of the winter ice storm, Monday still proved to be an icky day. Above: The Covington County Courthouse was closed today. | Andrew Garner/Star-News

What was predicted to be one of the worst storm days of 2011 passed as gentle as the rain that fell on Covington County Monday.

Local officials, from mayors, school superintendents to county commissioners, took an individualized approach in responding to predictions of icy roads and bridges caused by rain and freezing temperatures.

By Sunday afternoon, Gov. Bob Riley declared a state of emergency as the winter storm approached Alabama. By lunch in North Alabama, there were about 8 inches of snow in Huntsville, and by early afternoon, there were reports of “black ice” along portions of I-65 in Montgomery.

“There were no significant problems reported here because of the weather,” Harris said. “At first, we were on the borderline of having any ice, and we were concerned about the bridges. The thing about the weather is that it can change at any time.

“And it did,” she said. “The way the low front came in, it missed us. Even above us at Crenshaw County didn’t receive the amount of ice that was predicted. It moved more north, which was good news for us. Unfortunately, for those in the north, that’s where the real problems are. I’m thankful we didn’t have to face that.”

As for the rest of the week, Carpenter said to expect more cold temperatures.

“Thankfully, it will come without the rain, but it’s going to be cold – very cold,” she said.

During the next three days, temperatures will steadily decrease from a high of 49 degrees today with a low of 26 to on Thursday, where it’s forecasted there will be a high of 43 and a low of 21.