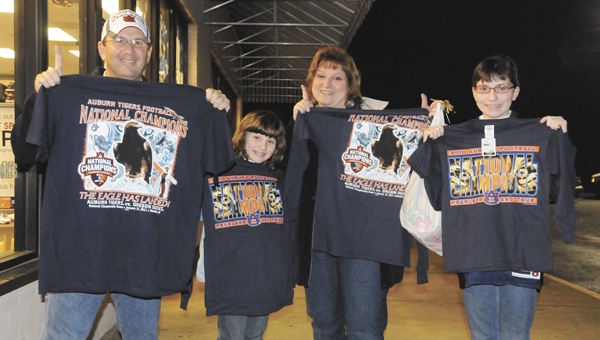 Fred, Allie, Connie and Bethany Karthaus were among the happy Auburn fans out shopping for championship gear late last night.

The game went to the wire, with the Tigers kicking 19-yard field goal as the clock ran out.

It was a once-in-a-lifetime experience for many Auburn fans, who weren’t alive the last time Auburn captured the football crown.

Fans who couldn't make it to Toomer's Corner rolled the court square in Andalusia.

It also was a victory for the state: the last time different teams from the same state won back-to-back championships was in 1938 and ’39, when TCU and Texas A&M were the big winners.

Minutes after the game was over, local fans were standing in line at local Hibbett’s Sporting Goods stores to buy championship T-shirts.