Bright didn’t worry about his security 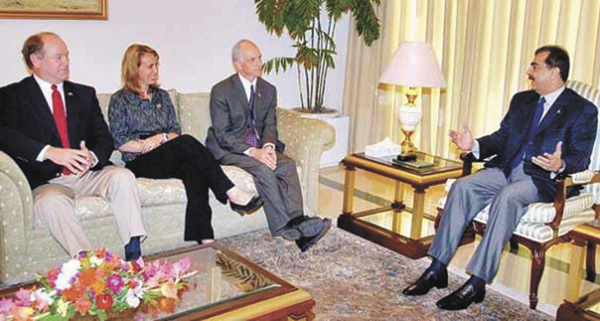 Then- U.S. Rep. Bobby Bright with Rep. Gabrielle Giffords of Arizona and Rep. Adam Smith of Washington on a Congressional delegation trip to Afghanistan and Pakistan in 2009.

The first time Congressman Bobby Bright had a Congress on Your Corner event, he held it in the parking lot of a large grocery store in Dothan.

His former district director, Al Allenback, said when he saw news coverage of a terrible shooting spree at a similar event in Arizona at which a congresswoman was shot and six people were killed, he had an immediate flashback.

But both Allenback and Bright said security was never a worry during the countless meet-the-public events Bright, a Montgomery Democrat, did in the Wiregrass in his two years in office.

“My staff worried about it sometimes,” Bright said Monday afternoon.

He didn’t. He said as a graduate of the Police Academy who’d completed SWAT training, he felt capable of defending himself.

Similarly, Allenback had spent 28 years in the Air Force and was trained in security. He said he contacted Capitol Police in Washington, D.C., weekly for intel updates that would have alerted him of anything happening in south Alabama.

“We were on the road a lot, but we always contacted the mayors and let them know when we’d be in towns,” Allenback said. “Every place we went, the sheriff, chief of police or an officer in one of the departments showed up. Whether we were in a city like Dothan or a smaller town, they showed great pride and professionalism in being aware they had a congressman in town.”

In the wake of Saturday’s events, will local police do anything differently when members of Congress visit?

“Just about every time they visit, we have at least one officer there,” Andalusia Police Chief Wilbur Williams said. “Certainly, this is now something we will readdress and accommodate them according to their wishes.”

The chief said his department also will keep in mind how we’d want our community to be viewed if something like the Arizona shooting happened here.

He was referring, of course, to the Bay County (Fla.) school board meeting at which a gunman took shots at the superintendent and other board members before being shot by a security officer and eventually taking his own life. As a result, Andalusia will have a police officer attend city council meeting.

To date, Williams said the only time he’s seen a local event with the potential to be violent was when Sen. Jeff Sessions held a town hall meeting here in September of 2009 to discuss the controversial federal health care plan which has since been adopted by Congress.

“There was a higher level of security,” he said. “We had a big turnout, and a fairly big presence of law enforcement.”

Similarly, Allenback said the summer of 2009 was the only time he ever felt uncomfortable when Bright did public events.

The town-hall style meetings favored by senators are easier to secure, Williams said, adding that the next such event here is set for 2 p.m. on Sat., Jan. 29, when Sen. Richard Shelby plans to hold a meeting in the courthouse. The sheriff’s department is responsible for security there.

“That’s a better situation because they do have metal detectors in place,” Williams said.