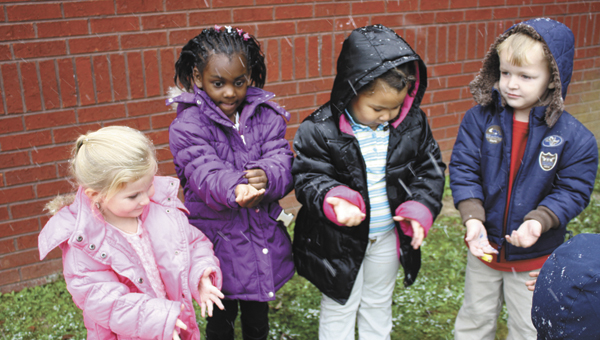 Kids at Bright Beginnings are shown bundled up during a previous cold weather day. | File photo

Each of the three local school systems devised an individualized response to Monday’s winter weather.

It was business as usual for students in Andalusia who reported to the classroom without any delays.

Superintendent Ted Watson said had the winter weather advisory changed to a warning for the area, there would have been no school.

“If there’d been a warning issued for our area, we would have shut down,” Watson said. “This weather caused a unique situation, and everyone had to make a call that fit their situation.”

In Opp, students did not report school; however, teachers reported to campuses at 9 a.m. and used the day as a workday.

“For us, it was a pretty simple switch,” Smithart said. “Our teachers were scheduled to have a workday in February where students did not have to report to school. Now, that day has become a regular day for students.

“The weather is so uncertain,” he said. “We would have had to put buses on the road when it was dark, and that was a risk we didn’t want to take.”

Holley said once word was received the governor had declared a state of emergency because of the weather Sunday afternoon, he made the decision to not open the county schools Monday.

“In our situation, we have buses that go all over the county,” he said. “In the northern parts at Straughn and Red Level, there was a good possibility there could have been ice on the roads and bridges. Plus, it would have made it difficult for families if we’d waited to the early morning to make a decision.

“We didn’t know how much rain we were going to get over the night or during (Monday), plus it was supposed to be a lot colder during the day,” he said. “That means we could have gotten the kids to school and then had problems getting them home.

“Good or bad, the decision to close school was a decision we felt we needed to make,” he said.

Holley said school personnel will decide in the coming days when to hold the makeup day.

“We have days in February and March, so we’ll have to see which is more convenient for everyone,” he said.