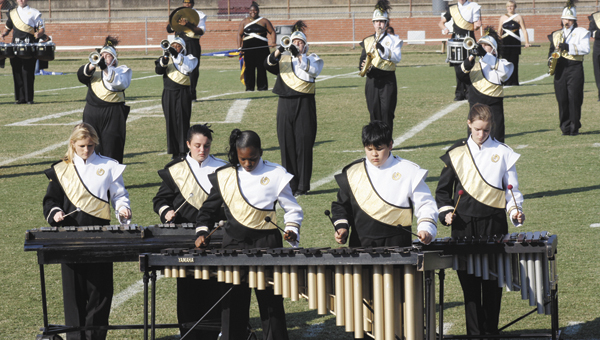 Students from Opp High School’s Marching Black and Gold band will be part of a history-making event Monday when they march up Dexter Avenue in Montgomery to celebrate the inauguration of Dr. Robert Bentley as Alabama’s 53rd governor.

The 75-member band, along with proud parents, will make the trek to the capital city Monday morning, band director Randy Hughey said.

“Everyone is very excited,” he said. “The band members, parents, teachers and administration are all excited over this honor. We will be representing Covington County in the parade.”

Hughey said the band will be unit 54 in the parade, which begins at 9:45 a.m. and will conclude around lunch.

Hughey said there are more than 50 high school and college bands participating.

Hughey said the band will perform “America the Beautiful,” which is the same selection it performed in the local Veterans Day parade.

Hughey said that Superintendent Michael Smithart and the Opp City Board of Education are picking up the entire cost of the trip.

“My only other experience in this parade was around 20 years ago, when I took the Straughn band,” Hughey said.

After the parade, Alabama Chief Justice Sue Bell Cobb will deliver the oath of office to Bentley using the state Bible that has been in use since 1853. First Lady Dianne Bentley and the couple’s children and grandchildren will also be present.

Smithart said this is an honor for Hughey and the band.

“The opportunity to participate in such a historic event should be a pretty good memory from their high school experience,” Smithart said. “We especially want to thank Rep. Mike Jones and Sen. Jimmy Holley for their nomination and giving our students this opportunity.”