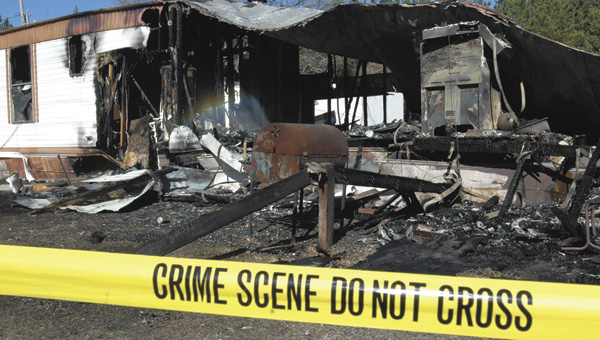 This mobile home was the scene of a horrific blaze that claimed the life of a father and son Wednesday. | Stephanie Nelson/Star News

Foul play is not suspected in the horrific blaze that left a father and son dead Wednesday.

The duo, who were identified Thursday as Freddie L. Steele Jr., 67, and his 44-year-old son Gary D. Steele, were both residents of the singlewide trailer on Mack and Marie Lane, located in a trailer park on U.S. Hwy. 29 South.

Emergency personnel were called to the scene at 11:50 p.m. to find the home fully engulfed in flames and the two men inside.

Chief Deputy David Anderson said the bodies have been transported to the Alabama Department of Forensic Science in Montgomery for an autopsy.

“At this point, we believe the fire to be an accident, but the investigation is on ongoing,” Anderson said.

He did not comment to the cause of the fire and stated the state Fire Marshal’s office is conducting the investigation into the blaze.