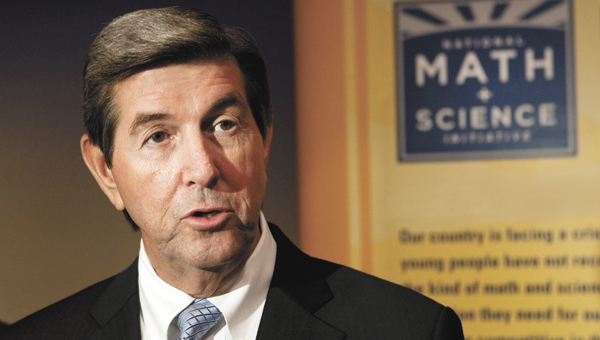 Legacy. It’s a word most politicians begin to think of regularly as their days in office grow fewer.

As he prepares to leave office on Monday, outgoing Alabama Gov. Bob Riley agreed to talk about that legacy.

Despite years of enduring the Washington, D.C., and Montgomery, Ala., grind, Riley has maintained his iconic Southern genteelness. His cowboy boots remain polished, his Reagan-esque hairstyle has rarely been disturbed and devotion to his wife, Patsy, has never been stronger.

As he discussed some of the challenges his administration faced over the past eight years, one thing was missing from Riley’s vocabulary: regret.

“Am I going to miss it? Yeah,” he said of leaving office. “Tom Ridge (former governor of Pennsylvania) told me, ‘You’ll enjoy this more than anything you’ve ever done.’ And, he was right. I wouldn’t take anything for the eight years I’ve had — good and bad times.”

As for Riley’s opinion on where Alabama is today compared to the day he took office in January 2003, he may not be satisfied, but he is pleased.

“I think Alabama has become the state — whether it is in economic development, education and now in ethics — that every other state looks up to.”

If there were any issue that may shape Riley’s gubernatorial legacy, other than his handling of natural — and some man-made — disasters, it would be the ongoing debate and legal battle over gambling.

From the development of gaming centers in such places as White Hall in Lowndes County to the Governor’s Task Force on Gambling, proponents of gaming have hedged their bets against Riley and to this point, lost big.

From slot machines in Walker County to Cullman to state-led raids on dog tracks in Greene County and Macon County, the past two years have seen sweeping enforcement of the state’s anti-gaming laws.

“As of today, as far as I know, there are no illegal slot machines operating in Alabama,” Riley said.

And, it appears the focus on gaming will continue in the next administration, as Gov.-elect Bentley has appointed incoming Attorney General Luther Strange to continue the task force.

When asked about how his administration dealt with disasters, whether it was hurricanes, tornadoes, snowstorms or ice storms — or even those man-made such as this past summer’s BP oil spill — Riley is quick to point to the systems in place; the responders on the ground and the structured response the state now enjoys.

During his administration, he has faced storms named Ivan and Katrina, tornadoes that ripped through high schools and tar balls washing up on sugar-white beaches.

“Jeb Bush (former governor of Florida) told me ‘you’ll be judged more how you handle catastrophes, how you handle hurricanes than anything you do,’” Riley recalled. “And, there’s a lot of truth to that.”

And Riley credits the work of his cabinet — a cabinet that he once bragged about to then President George W. Bush, saying “I’ll put my cabinet up against yours anytime” — for the effective response to disasters under his administration.

But the one disaster that has led to near economic disaster in the southern part of the state, political unrest in the state capitol and uneasiness among those fishing the waters just off the coast, was the summer’s oil spill.

“Absolutely not,” Riley said when asked if the state was prepared to meet the challenges of the oil spill. “Everyone assumed that if there was a leak, it would be small and you could mitigate the damage.

“And then you see that 49 million barrels were released. I don’t think anyone anticipated that.”

As oil from the ruptured well made its way on shore in Louisiana and Mississippi, Riley was frustrated with the directed response from Washington, D.C., that he felt hindered his own efforts in protecting Alabama’s coast.

“I want to make sure Alabama is never in the position that we were in this time, where people in Washington, D.C., were making a fundamental decision where resources were necessary,” Riley said.

Now that the beaches are nearly back to their pre-oil spill condition, Riley is looking to the state’s future.

Unsure of whether or not tourists who had to shift their travel plans to others parts of the country will come back to the Gulf Coast this summer, Riley said all he and other leaders can do is work to reassure everyone things are better.

“I don’t think any of us know what is going to happen next year, five years from now, 10 years from now,” Riley said. “We’ve been spending millions and millions of dollars talking about the quality of seafood that comes out of the Gulf of Mexico.”

Riley will see his term in office end Monday and plans to return home to Clay County.

In the meantime, he has been working to ensure all of the projects his administration has worked — and all the fires that are still requiring his attention — are handled seamlessly.