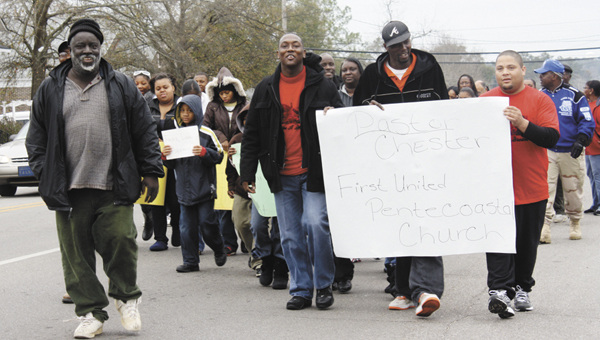 A group of more than 80 Opp residents gathered at the Opp Police Department for the annual march in honor of Dr. Martin Luther King Jr. Participants said they gather to celebrate the legacy King left. | Kendra Bolling/Star-News

For at least the last 25 years, Opp residents have gathered together to commemorate the life of Dr. Martin Luther King Jr. each year on the third Monday in January.

The group gathers at the Opp Police Department for a short speech and then marches down Main Street to the Martin Luther King Jr. Park on Hardin Street.

This year was no different, with more than 80 people – old and young – attending the march organized by Robert Edwards.

“We’re still trying to carry on his legacy,” said Angela Henderson, an Opp resident, who has participated for at least the last 20 years.

“Dr. Martin Luther King fought for our freedom of rights,” said Bill Edwards, who has participated for about 25 years. “He lost his life for this cause. It’s not just about blacks or whites. It’s about his legacy.”