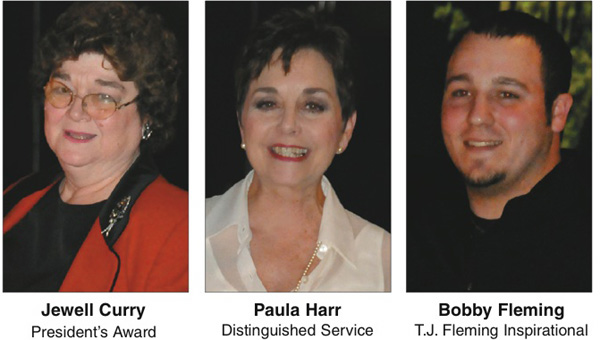 The Andalusia Area Chamber of Commerce recognized two Andalusians and announced a new award at its annual banquet Tuesday night.

Outgoing Chamber president Jed Blackwell called Jewell Curry the “jewel of Andalusia” in presenting her with the annual president’s award.

Curry, who chairs the city’s Tourism and Relocation Committee, was recognized for her role in organizing Absolutely Andalusia Homecoming 2010.

“She contributed on every level to this event,” Blackwell said. “Her leadership, enthusiasm, selflessness and love for Andalusia are pure contagious.”

Curry moved to Andalusia as an elementary school student in 1937 and graduated from AHS in 1954. She was trained as a nurse practitioner, and worked both at the Columbia Nursing Home and the Covington County Health Department.

“Her heart has always been to care for others,” Blackwell said.

Paula Harr was recognized as a person who “has touched more people in our community than any other person as far as the arts are concerned” as she was presented this year’s distinguished service award.

Incoming president Janna McGlamory, who presented the award, said Harr works tirelessly to expose people of all ages to the arts.

Harr has been the executive director of the Covington Arts Council for more than 20 years. She serves on the board of directors for the Lower Alabama Arts Coalition and is a charter member of ACT I.

She was nominated by Ben Bowden, who wrote, “She is the ultimate behind-the-scenes worker-bee promoting the arts … not herself.”

The Chamber also announced a new award, and presented the first one to the family of its namesake.

Blackwell said the T.J. Fleming Inspirational Award will go to an individual enrolled in a local school system or the community college who has made an impact or influenced others in an inspirational way.

“T.J. was diagnosed with a very rare type of glandular cancer in his head/throat region in January 2010,” Blackwell said “This rare form of cancer spread at a very rapid pace, but not before T.J. touched the lives of so many people not only here in Covington County but across the country.

The Florala High School graduate was an LBW Community College student and baseball player whose coach, Steve Helms, described him as “a coach’s dream.”

“T.J.’s relentless work ethic and self-determination drove him to never be satisfied, nor allow those around him to settle for anything less than what they were capable of achieving.”

Fleming died on May 25, just months after his diagnosis. His brother, Bobby Fleming, accepted the award for his family.