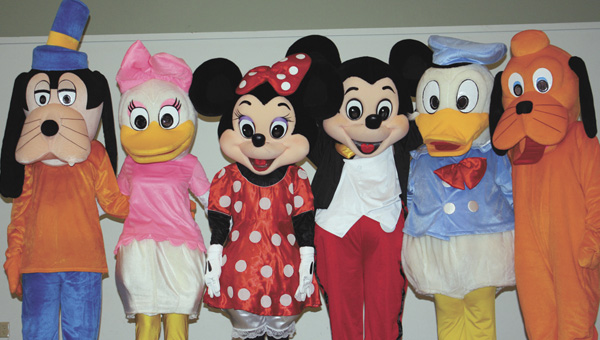 Think you’ve got what it takes to be Tinkerbell, Spiderman or Big Bird?

Then prove it, said Kiley Spears, organizer of the annual “Cookies with Characters” fundraiser for Meredith’s Miracles.

“We need more than 70 people for characters for this year’s event,” Spears said. “We have 45 costumed characters that we will feature, but we’re going to swap people out. Last year, we only had about 30 people show up for auditions, and we need double that this year.”

“We’re looking for energetic people who are full of personality,” Spears said. “There are several characters who are in full costume, and there are some that require the actors or actresses to look the part.

“Take for instance Cinderella. She’s blonde,” she said. “We can’t have a dark-haired Cinderella.”

Spears said while costumes will be provided the day of the show, it helps for character hopefuls to come to auditions “in character” with hair and makeup.

“It really helps to be able to visualize that person in that character,” she said.

There will also be a host of new characters at this year’s event, including Big Bird, Mario and Luigi, Beast will be joining Belle, Hello Kitty, Rapunzel from the new Disney movie, Barbie, and Tinkerbell’s other friends Iridessa and Silvermist.

Those who plan to show up for the tryouts are asked to call Spears at 427-5321 for more information.

“You can’t just get in the costumes and stand there,” she said. “You’ve got to be really crazy and silly when you’re in the costumes, but it’s really a lot of fun, and I think these kids will enjoy it.”

Meredith’s Miracles is a non-profit foundation named in honor of Meredith McGlamory, who passed away from a form of childhood cancer in 2003. The charity assists parents who have to leave the area to get specialty medical care for their children. Meredith’s Miracles helps with non-medical related expenses, such as gas, lodging and food, for families within a 60-mile radius of Andalusia.