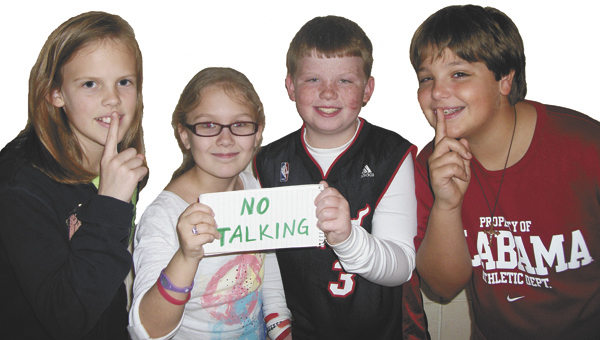 It’s a simple command that a group of Andalusia Elementary School fifth graders took to heart this week as an experiment after reading Andrew Clements’ “No Talking.”

Aside from the fact that boys are better at not talking than girls, the group said they learned just how important spoken words are – and how valuable silence can be.

Barbara Peek, AES teacher, said Clements is a favorite author among the students, and in this novel, readers follow the story of Dave Packer as he reads about Mahatma Gandhi, who used to spend one day each week in silence so he could bring order to his mind.

“Dave thinks this is an excellent idea, and so did our students,” Peek said.

It especially peaked the interest of Steadman Glenn and Tessa Walker, who asked their teacher if the class could undertake a similar experiment.

The result? A one-day competition between the boys and girls Wednesday in which students could only communicate using three words, sign language, or notebooks and pens.

“It was really hard for me,” Glenn said. “I’m a talker. What I learned is that there are sometimes when you just have to be quiet.”

Walker said the experiment was a bit difficult for her as well.

“I’m a talker, too,” she said. “What I realized is that to know something, you really have to listen.”

Peek said students learned how to focus their thoughts and “organize their minds,” just as the book illustrated.

“They really had to choose their words carefully, to think about how they wanted to express their thoughts,” she said. “I can relate. I used to listen to the car radio all the time, now, after being surrounded by my kids, my classroom, I like to listen to the quiet. It’s calming. It was nice the children got to experience that to a degree.”

All who participated the practice of being quiet said it got harder as the day progressed, including Will Clark and Tori Harrison.

“Usually, we’re really talkative,” Clark said. “I’m the type of person that I like to talk a lot, and I like to elaborate on my words. When you have to choose three words to say, you choose them carefully. And that got harder and harder to do.”

“It was really fun, though,” Harrison said.

“As a former dancer, now working at a desk job and progressing in age, I knew I had to do... read more