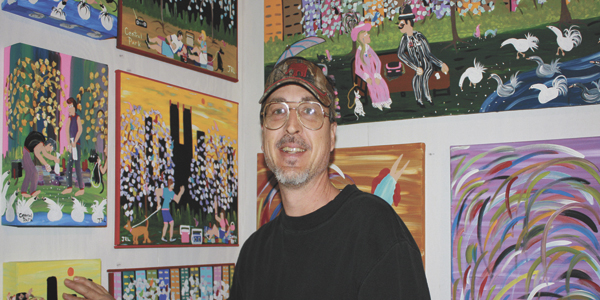 Rick Long poses inside his new gallery with some of his recent works.

Each one of Rick Long’s pieces tells a story.
There are the Central Park ones that showcase the green expanse and whimsicalness of New York’s most famous park.
Then, there is the “City People,” whose graceful movement is forever captured in hues of greens, reds and blues.
On pieces of sewn lumber are depictions of Bible scenes, immortalized in tones of brown, yellow and clay red.
And we shouldn’t forget about the roosters.
“I love the color of the art,” Long said. “Folk art has come a long way. I started doing this years and years ago, but stopped when everyone started doing folk art.”
Long, an Andalusia resident since 1992, has recently opened a new gallery next to his Brooklyn Road home. Inside the small red building, the walls are covered with examples of his works.
“When people think of folk art, they think of crafts and baskets,” he said. “When you see the work, that changes quick.”
If the name “Long” and the subject of folk art sound familiar when put together, you’d be right. Long is the son of renowned folk artist Woodie Long, a house painter turned artist, whose pieces are included in the permanent collections of museums nationwide and whose paintings have been published in numerous books, as CD covers and accompanying magazine articles in major magazines such as Smithsonian.
So, yes – the Long family knows folk art.
“My dad had such a unique style,” he said. “He was a man not afraid of color. I think I got that from him, but we came to an agreement early on. We didn’t want people to think that I was copying him, and I didn’t want to come close enough to his style for people to think I was doing his work.
“The roosters, they’re all mine,” he said. “Dad did people. I do roosters.”
Long said he loves to see people appreciate his work.
“It’s nice to sell something,” he said. “It’s that feeling of knowing someone has seen something they appreciate and are now walking out the door with it. That makes me happy – seeing someone enjoy what I do.”
His most recent undertaking is creating scenes from the Bible using nothing but the clay from his own yard, as well as creating his own wooden canvas out of scraps from the local wood yards.
“Bible scenes aren’t really done a lot,” he said. “The Bible – it holds such inspiration. And the clay, well, it doesn’t get more simple than that.”
Long’s gallery is open Friday, Saturday and Sunday, and is located three miles down Brooklyn Road, just past Cedar Grove Church of Christ. He can be reached at 334-222-8341.
You Might Like