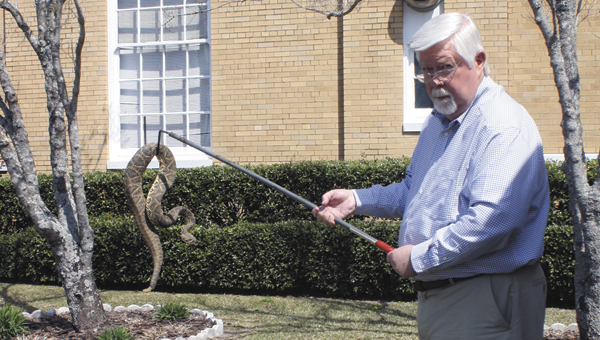 City planner Don Childre with one of the snakes from last year’s rodeo. Organizers are looking for new hunters to help with this year’s event. | File photo

For the past 51 years, the Rattlesnake Rodeo has become synonymous with the City of Opp.

And each year, the city ends up with close to 100 snakes, but not without the help of locals who help catch the snakes.

The snakes come from Covington, Coffee and Dale counties, and usually average close to the 7 or 8 pound mark, City Planner Don Childre said.

And this year, the city will pay residents for their live snakes to be shown at the year’s rodeo, set for April 1 and 2.

And for anyone who’s lucky enough to catch one that’s more than 8 feet long, the city will pay $1,000 per snake, Childre said.

“We’ve been paying our hunters for years, but most of our old hunters have quit so we thought we’d open it up to the public,” he said. “We will not accept rattlesnakes under 2 feet.”

When the rodeo is finished, exactly what happens to all the snakes that are captured?

“It varies from year to year,” Childre said. “We have several options. Whatever’s the most advantageous that’s what we’re going to do.”

In the past, the snakes have gone to a skin dealer, and Auburn University to study a parasite the snakes have in their lungs. They’ve also been given away for venom milking.

“There is not much of the snake that can’t be used,” Childre said.

The meat typically sells for $14 to $15 a pound, and skins are in high demand for boots.

“One year we collected vertebrae and boiled them down and sent them to the Hopi Indian tribe, who used them for jewelry. They grind them down and you can’t even tell what it was. And everyone wants a rattle.”