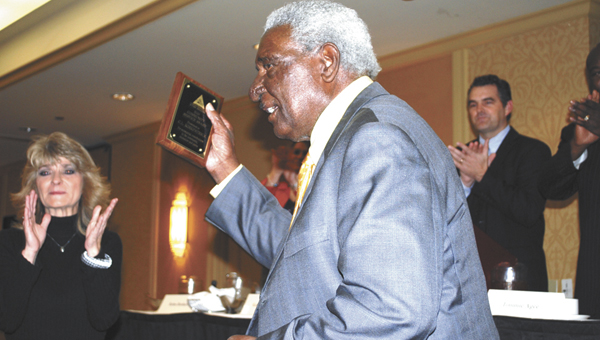 Kirkpatrick was recognized for his donation of land and contribution of $200,000 for the construction of Kirkpatrick Park, which opened last May.

“Mr. Kirkpatrick was faced with a tragedy and he turned it into a triumph for his community,” members of Andalusia Department of Leisure Services wrote in nominating him. “He should be commended for his generosity and his progressive thinking. He has helped to create a unique landmark for the City of Andalusia that will be enjoyed for generations to come.”

Kirkpatrick’s wife, Sallie Ann, perished in a fire that destroyed the family’s home in the aftermath of Hurricane Ivan. It is their former home site that has become Kirkpatrick Park.

In the next phase of the park’s development, a children’s play area will be added.

“We were thrilled he got the award with all the competition out there,” said Barbara Tyler, of the Department of Leisure Services, who worked with Kirkpatrick in the development of the park.

Mayor Earl Johnson called the new park a “tremendous resource” for the city and said the Kirkpatrick family’s generosity “goes beyond almost anything in recent memory in the way of individual contributions to the city.”

“Mr. Kirkpatrick has always been an outstanding citizen of the City of Andalusia and always done his part with respect to his civic duty,” Johnson said. “He has always been generous with his time and resources.”

The Covington Historical Society will meet at 7 p.m. on Thurs., Jan. 27, at the Dixon Memorial Room of the... read more