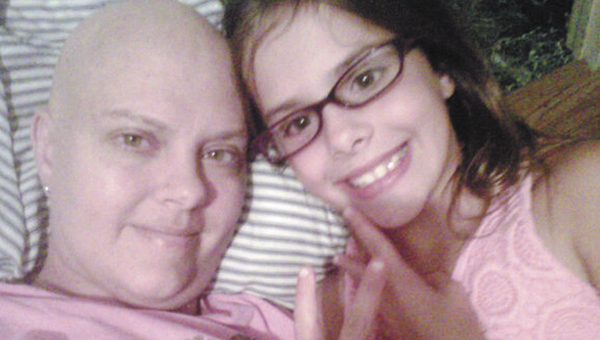 A Luverne woman can be considered a walking example of “trusting in the Lord with all your heart.”

Joy Burgans, a registered nurse and mother of three, found out last April she had stage 3 breast cancer, and was chosen as this year’s proceeds recipient from Florala’s Cancer Freeze slated for Feb. 5.

Burgans said she found out she had breast cancer “quite by accident.”

“Steve (her husband) found the lump accidentally, while we were playing around,” she said. “I didn’t want to scare him. I didn’t want him to think the worst. I put on a big front. Being a nurse I knew that it didn’t necessarily mean I had breast cancer. But deep down inside I felt like that’s what it was.”

Burgans went for a mammogram, biopsy and ultrasound all in one day, and found out several days later she had the cancer.

“I knew when the doctor called us in that’s what it was,” she said. “I asked her, ‘So what are you going to do about it?’”

Burgans said they told her what options she had.

“They told me it was a very aggressive type of cancer and only chemo would work on it,” she said. “I elected to have a double mastectomy because I didn’t want to risk it coming back.”

Despite everything, Burgans said she knew all along God was going to take care of the situation.

“I never worried about it not being OK,” she said. “I guess you could say I had an inner-peace. I just knew. I got through this by trusting in the Lord. I know He’s going to do what’s best, and He’s in control.”

Burgans said through her cancer fight, she drew closer to God.

“I had to depend on my faith to get food on the table and to pay the bills,” she said. “It was overwhelming. You don’t realize what you take for granted.”

Burgans underwent eight rounds of chemo just to shrink the tumor before having the surgery.

“It started out as small as a golf ball, and at one point during the chemo, it was as large as an orange,” she said. “But it went back down. At one point the doctors were pretty worried the chemo wasn’t going to work.”

She had her mastectomy in October.

“They took samples of my lymph nodes on both sides,” Burgans said. “The doctors think they got it all. I have one more procedure for the finishing touches on the reconstruction.”

In addition to bills, Burgans said she had the expense of paying medical co-pays, medicine, and gas to and from Montgomery, which ranged from $200 to $300 a month.

Burgans said the staff at Troy Regional Medical Center where she worked prior to undergoing treatments donated their paid time off to help her pay her insurance premiums.

“They did that as long as they could,” she said.

Now the family is forking over $1,000 a month for COBRA insurance.

“That has taken care of three months of insurance for us,” she said. “With the Cancer Freeze. I think it’s God’s way of continuing to take care of us.

Burgans said she’s ready for the day she can go back to work.

“I’m going to go back to work (at TRMC) when I’m able,” she said. “They have made me feel like family, and I only worked there for a short time.”

“I’m not the sit at home type of person,” she said. “I was used to working 120 hours every two weeks and working none was really depressing.

“I’m used to taking care of others, not having others take care of me,” she said.

Those interested in participating in the annual fundraiser held at Florala’s Lake Jackson will have an opportunity to water ski, wakeboard, kneeboard or tube in the frigid waters of Lake Jackson – all for a $20 minimum donation.