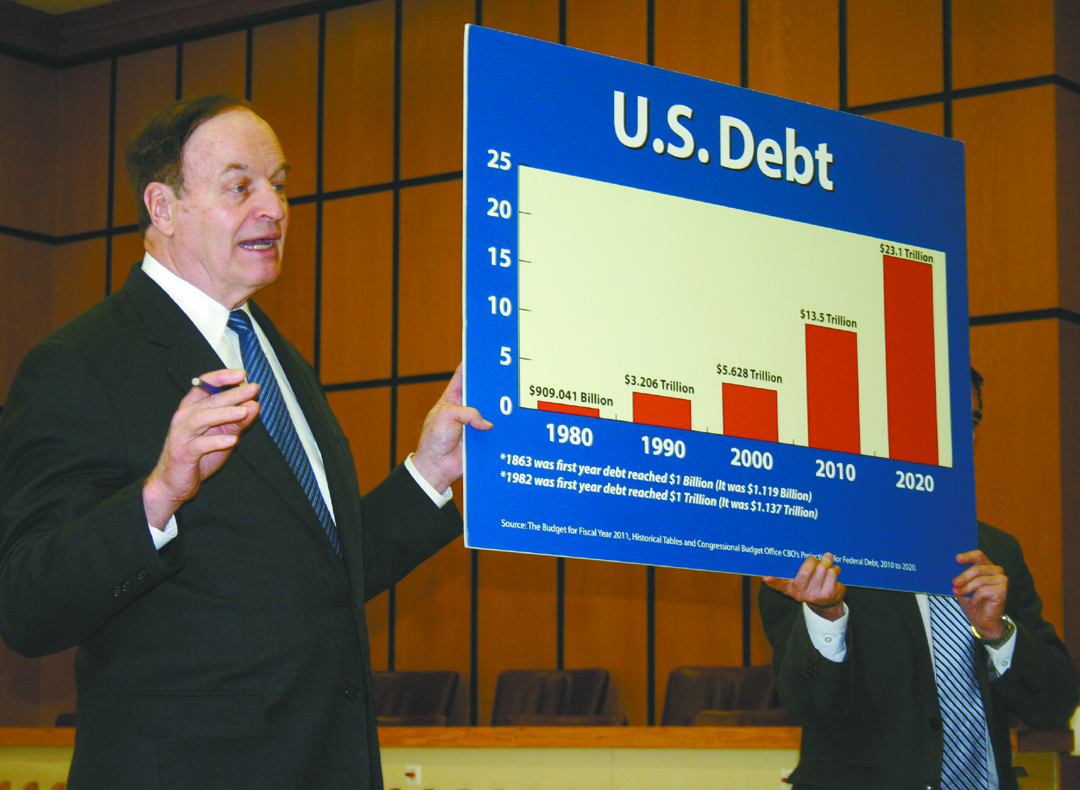 Alabama’s senior senator responded, but he was really visiting communities in the state to talk about the need to curb federal spending.

“It is my obligation and responsibility to tell you the truth,” Shelby said. “We are on the road to financial destruction and it’s unsustainable.”

He said there are tough votes ahead to cut spending.

“We don’t want to be a bankrupt nation like Greece,” he said. “Except there would be no one to bail us out.”

Debt matter, he said, adding that Republicans need to gain control of the U.S. Senate to get spending in line. Discretionary spending needs to be cut, he said.

“If we show we’re serious, imagine how the dollar would rally in the world,” he said.

Two-thirds of the federal budget is on automatic pilot, he said, because of the demands of Social Security, Medicare and Medicaid.

“Social Security has been a good program,” he said. “But I have two sons who want their money now because they feel like – and they’re probably right – that it won’t be there in 30 more years.”

One solution, he said, is to gradually increase the age at which seniors qualify for Social Security.

“That could save billions of dollars,” he said.

“I’m willing to take the tough vote,” he said, adding that he voted against bailout/stimulus plans won by both the Bush and Obama administrations.

Those speaking out included:

• Twenty-year veteran teacher Kelly Brandon of Opp questioned the legality of taking tax dollars from individuals and using them to take care of the problems of others that are a result of choices they made.

“I realize the difference between a need and a want,” she said. “Cigarettes, alcohol, cell phones and nails are not needs.”

Brandon said parents drop students off at her school, an elementary school in a different county, where they are fed a free breakfast, free lunch, and participate in a free after-school program.

“And they drop these children off in Navigators,” she said, referring to Lincoln’s luxury SUV.

“We are rewarding that behavior,” she said. “What can we do?”

• Ashley McKathan, who asked why Shelby had not signed on to pro-life legislation now in Congress.

Shelby answered, “I have a good record with the pro-life people,” adding that the bill is in the House, not the Senate.”

McKathan responded that if Shelby were 100 percent life, “You would be pushing to get it in the Senate.”

• Mary Jane Winkler, who asked about the lack of a U.S. exit strategy in Afghanistan.

Shelby responded that he supports the troops, wherever they are, but doesn’t think Afghanistan will be different 10 years after America leaves.

• Wyley Ward, who talked about green energy and asked Shelby’s staff to find out how much it costs per kilowatt hour to have solar energy in the White House.

• Irene Butler, who told Shelby he hadn’t “stomped the floor and hollered enough,” asked why Obama has not been impeached.