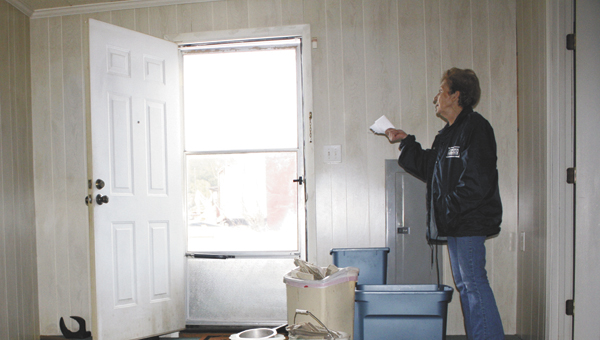 Doris Andrews was about to head to the bathroom when she heard the loud rumbling noise that was her next-door neighbor’s roof crashing onto the top of the 150-year-old building that housed both her home and her business, Country Corner Boutique.

Next thing she and husband Buddy knew, there was rain pouring through the back of their home – courtesy of the weather system that brought heavy winds, thunder and lighting and rain throughout Covington County Tuesday night.

At least eight trees were brought down, knocking out power in parts of Florala and its surrounding rural areas.

The damage to the Andrews’ building was caused when high winds ripped the newly installed tin roof from the building next door owned by Glen and Barbara Powell.

“I had thought to myself ‘I really need to get a bath before things get bad,’” said Doris Andrews. “That’s when I heard the rumbling and decided,’ oh no, I think I’ll wait on that bath.’

“Then, I walked to the back and saw the tin on the ground,” she said. “It wasn’t long before I was running to get pots to put on the floor as water started coming down.”

The Andrews’ daughter, Leslie Gibson, was on hand to help in the cleanup process.

“Thankfully, the power company came right away and pulled the outside meter to cut off the power, so nothing would catch on fire,” Gibson said. “That gave them a small peace of mind since both Mom and Dad said they weren’t leaving their home.”

Locals won’t see extended periods of sunshine until Saturday, but the day still holds a 20 percent chance of rain.