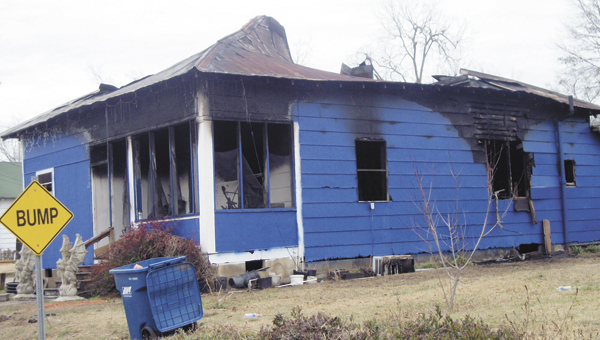 A Florala family is lucky to be alive after a fire destroyed their Seventh Avenue home just after midnight Wednesday.

Florala Fire Chief Keith Martin said the home of Gary Maxey, his wife and four children, is a total loss.

“It’s still standing, but what the fire didn’t get, the smoke and water did,” Martin said. “They lost everything. From what it looks like, the fire was electric in nature and originated where a space heater was plugged in.”

Martin said the family was asleep when the blaze started.

“If Mrs. Maxey hadn’t awoken, things could have ended much differently,” he said. “When we arrived at 12:17 a.m., the house was fully involved. They were very lucky to get out.”

Units from the Florala and Lockhart volunteer fire departments responded.

Maxey is employed with the City of Florala’s street department. Fellow employees and city officials have begun accepting donations for the family, which may be dropped off at city hall. Below is a list of clothing sizes needed.

The family is currently staying with Maxey’s supervisor until other arrangements can be made.

Florala Mayor Robert Williamson said a spaghetti supper benefit for the family is set for Sat., Feb. 12, from 11 a.m. to 2 p.m., at the Florala City Middle School Cafeteria. Plates will be $6 each. The band “Riverchase” will be there to entertain. Meanwhile, all other contributions can be brought to Florala City Hall. For more information call (334) 858-3612.