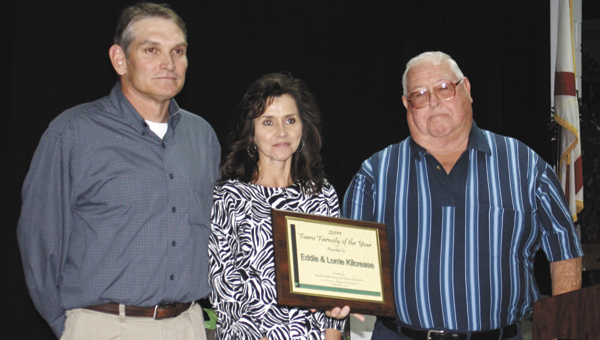 Farming is something Eddie and Lorrie Kilcrease have worked toward for the majority of their 28 years of marriage.

The couple married in 1982, purchased 63 acres in 1987 and has worked hard every day since to build their farm into a poultry farm.

And it was that hard work that led to the couple being named the Opp and Covington County Chamber of Commerce’s Farm Family of the Year Thursday. The annual banquet, held at Opp Middle School’s multipurpose room, honors local farmers and the impact they have on the community.

Dr. Steve Boothe, who serves on the selection committee, presented the award to the Kilcreases.

“The couple was faced with the same thing that most who want to go into the poultry business are,” Boothe said. “Obtaining a broiler contract for chicken houses.”

The Kilcreases successfully obtained their broiler contract in 1996 and built four houses, and in the years to follow added two more.

“They have consistently been in the top 5 percent in performance ranking,” Boothe said. “And have been the No.1 grower several times.”

The poultry farm produces 164,400 birds per flock and six or seven flocks per year.

Lorrie Kilcrease said the family was very honored to win the award.

“It really means a lot,” she said.

Having a poultry farm is something Lorrie said was a “Godsend,” after trying for more than seven years.

“It was just meant to be,” she said. “We got approved right after our youngest son went to kindergarten.”

But before then, the couple made sure that’s what they really wanted to do.

“We worked and visited other chicken houses, to make sure it was for us,” she said.

Lorrie said the poultry business is “very competitive” but it’s something they enjoy.

“We enjoy it,” she said. “We love being able to stay at home and we loved raising our children here.”

Boothe commended the Kilcreases on their dedication to involving their sons, Dustin and Ethan, in the farming process.

“The family has worked extremely hard and are very active in church,” he said. “They have dedicated their lives to raising two sons to appreciate country living, and learning how to work.”

The sons have a long list of accomplishments to their name, Boothe said. Some of those include volunteering with Meredith’s Miracles Cookies with Characters and other service projects.

Both are currently studying at Auburn University – one in civil engineering and the other poultry science and pre-veterinary, he said.

Boothe also said Dustin and Ethan have been an integral part of the Kilcrease family farm.

“I don’t know what more you could say about two kids,” Boothe said. “They’ve done everything community-wise.”