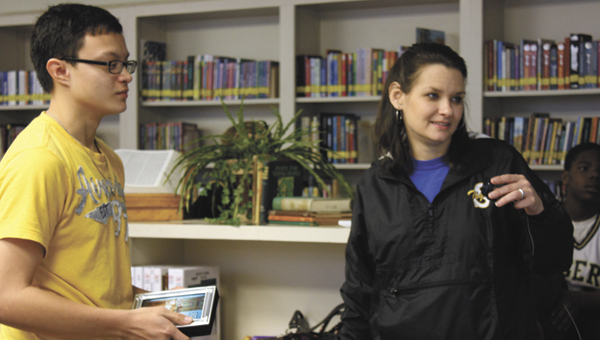 They say, no matter where you come from, “we’re all the same,” and a group of Straughn Middle School students recently learned this lesson.

Through an innovative approach to learning geography, seventh graders in Seth Richards’ class had a firsthnad look at the people of India.

Using Skype, an Internet-based software application that allows users to make voice calls over the Internet, and an Indian translator, students were able to meet and talk to students in an Indian orphanage.

Friday was the second time the students came together to talk, and SMS students showed off their hobbies and explained items used in cow showing, cheerleading and hunting.

“We’ve made a cultural connection with these students in India,” Richards said. “We talked about India in our geography textbook, but now we are sharing the American lifestyle with them verbally.”

Richards said the first time the two groups connected, the Indian students shared their culture with the SMS students.

“We decided to show them our hobbies,” he said. “All students discussed their hobbies, including sports, hunting, technology, cow showing and even pageant dresses.”

Richards said SMS students read the Asian chapters in their books and made questions from the chapters and asked them to the Indian students.

“The Indian students answered them from their experiences,” he said. “That opened the door for more questions. They are getting much more out of this – things you can’t get from textbooks. Real-life answers.”

Librarian Alison Thomasson said throughout the entire process, which began when a local church sent a Samaritan’s shoe box purse to a child at the orphanage and they received a thank-you note, the students have learned a lot about themselves.

“When we first asked them to choose a hobby to show the Indian students, there were some who didn’t know what they had to share,” she said. “But they went home and came back and said, ‘I know what I can share.’

“I think that the students have really learned that even though the students live far away, we’re all the same,” she said. “Both groups are similar, despite the cultural differences. I think it’s a valuable lesson our students have learned. For example, the students have some of the same reactions when they learn something new.”

Students were excited about the new learning approach and the information they have learned through the series of interactions with the students in India.

“It’s been really fun,” Bailey Hammett said. “We’ve done it twice, and it’s amazing getting to hear how they talk.”

Kayla Inabinett described some of the interesting things they have learned.

“(The Indian students) wear school uniforms and we don’t,” she said. “The girls have to wear beads braided into their hair and a little jewel on their forehead. During Christmas they showed us traditional dances.”

While Friday’s meeting was the last chance this class will have to interact with the students, another class will soon begin.

“Everyone will have the opportunity to experience this,” Edwards said.