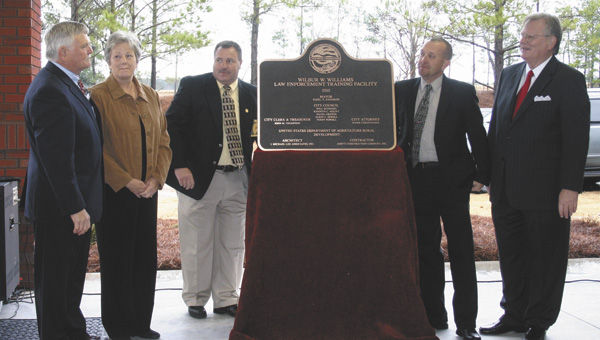 Andalusia Police Chief Wilbur Williams is rarely at a loss for words.

But the well-spoken chief swallowed hard before stepping to the microphone after learning that the city’s new police training facility had been named for him.

More than 100 people braved cool weather and constant rain to attend the official opening and dedication of the new training facility Friday morning.

Mayor Earl Johnson praised Williams for his work in Andalusia over the past decade, saying that he challenged the chief to make his department the best-equipped and best trained.

“This is a culmination of that goal,” Johnson said, announcing that the $1.2 million facility was being named the Wilbur W. Williams Law Enforcement Training Facility.

“I can’t tell you what that means to me,” Williams said.

The 2,500 sq. ft. facility, which is located off of Academy Drive, sits on a 15-acre parcel adjacent to the department’s firing range, where recent renovations have outfitted it with 20 pistol lanes and a rifle area and a “shoot” house used for close-quarters tactical training. Classrooms are outfitted with a television, whiteboard, retractable projector screen and complete computer hookups.

The facility was funded with proceeds from a USDA grant and a USDA low-interest loan and “lots of sweat equity,” Williams said.

Williams recalled that he was attending a state chiefs conference and listening to a program about the availability of USDA funding when he received a phone call from the mayor letting him know that the local facility was being funded.

Members of Williams’ family were on hand for the surprise honor, including his wife, Alleta; his son, Trip; his daughter and son-in-law, Jennifer and Barry Porter, and their children, Eldon, Ella and Barrett.