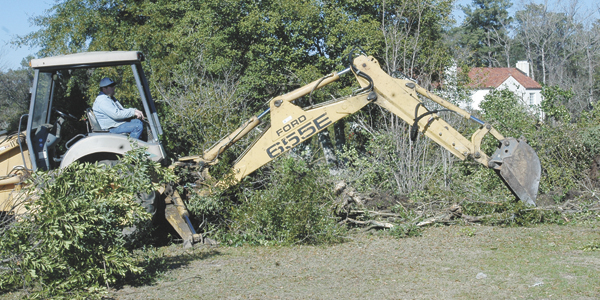 A city worker clears the site next to the Springdale Estate where city officials hope to create Central Park. Stephanie Nelson/Star-News

The City of Andalusia is working with a Birmingham firm to design a long-term plan for what might become Central Park.

The 14.5 acre park will include city hall, the veterans memorial, Springdale and the recently-acquire property between city hall and Springdale.

The recently-acquired office building will be torn down, he said, adding that its current footprint will become a parking area. That parking area will be connected to the parking in the rear of city hall, with a few spaces added closer to city hall. As well, a driveway from the rear of Springdale will connect to existing parking.

“This is designed so that if an event were taking place at Springdale, you could drop people off on the property and then exit to the parking behind city hall instead of trying to get in and out on East Three Notch,” Johnson said.

Similarly, the current walking trail at the veterans park will connect to new walking trails on the Springdale property.

A pavilion is proposed for the Springdale property, and the current garage will be altered to facilitate crowds. The garage portion will become a prep kitchen to be used by caterers; an office will be added; and restroom facilities will be added. The plumbing is already in place, he said.

Johnson said that the slight slope of the front yard lends itself to seating for outdoor performances. Preliminary plans call for a portable stage to be used for such events.

The architects have proposed playing on the lush Japanese plants already in place to give parts of the property the feel of a botanical garden.

“The potential is unlimited,” Johnson said. “Dale works all over the Southeast, and says there is not another park facility like this in a town our size.”

The mayor said the preliminary plan was painted with “broad strokes” and that cost estimates and potential sources of revenue must be identified.

“We won’t do all of this at once,” Johnson said.

He said he expects it will be calendar year 2012 before the facility is available for rent for private events.

“We’ve got to get the restrooms and other facilities in place,” he said. “We don’t want people to use it and it not meet their expectations, because that will hurt us in the long run.”

He said more detailed plans will be presented to the council before work moves forward.