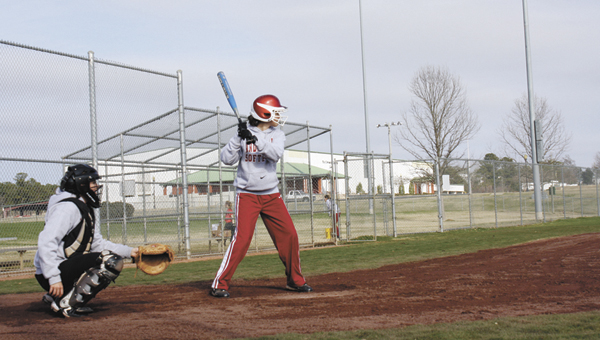 Local teams are were practicing at the Andalusia Sports Complex on Wednesday. The complex is being used as a temporary facility for youth sports this baseball, softball and t-ball season, while Johnson Park is being renovated. | Kendra Bolling/Star-News

The soccer fields at the Andalusia Sports Complex are now in the process of being temporarily converted to ball fields because of the Johnson Park renovation project.

Work is now under way to construct temporary t-ball, softball and baseball fields at the site for the upcoming ball season, said Dwight Mikel, director of the City of Andalusia’s department of leisure services, said at Tuesday’s Rotary meeting.

“In order to have a place to play, we had to take the sports complex and modify it so that we can play all the youth ball teams out there,” Mikel said. “There will be six fields – three t-ball/pitch and three 9-12, baseball/softball. We don’t know exactly how we’re going configure those fields, because we’re waiting until the end of registration to see how many kids we’re going to have.”

Ball registration is currently ongoing and will end Feb. 18.

“Until then, we’re in a holding pattern,” he said.

However, work has not been idle at the site, he said.

“You may have noticed the soccer fields,” he said. “They’re gone. We’ve added perimeter fencing and back stops for the coming year’s ball season.

“As for how things are going to work, this year will be an anomaly,” he said, speaking of the playing schedule which will have both city ball leagues and county ball leagues playing at the one facility. “It’s going to be a huge challenge. We may have to start the season a little earlier, play a little later and maybe even have some game on Saturdays, but we’ll make it work.”

Mikel said a more definite plan for practice times and game schedules will be announced once the city league and the county league know exactly how many players are on their rosters.

“One good thing that will help us in the practice area is that teams in the county league can practice at their school,” he said. “We will make things so that each team has practice time on the fields at the sports complex.”