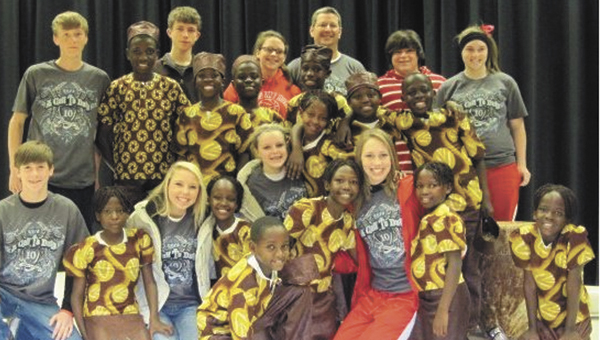 Students at Pleasant Home School pose for a photo with Ugandan Thunder last year, when the group performed. | Courtesy photo

Local residents will have multiple opportunities to learn about the children of Africa next week.

Ugandan Thunder will perform favorite hymns, in both American and African styles, plus they will present music in their native Lugandan tongue.

Typically, the concerts are high energy and full of singing, dancing and African percussion.

Additionally, the children will share about growing up in a land that has been ravaged by a 21-year war, poverty, AIDS and malaria, and will show how faith in God has changed their hopeless lives into lives with great meaning and purpose.

Ugandan Thunder is sponsored by “Pennies for Posho,” a non-profit Christian organization that is committed to feeding hungry children in Africa.

“Ted Moody is the missionary who handles Ugandan Thunder,” Brady said. “He is a pastor who God just laid missionary work on his heart. He is trying to raise money to help African families. Fifteen million children die each year from hunger and Ted runs orphanages in seven or eight cities.

“When Ted called me a year and a half ago, and said he would be bringing the group to America,” Brady said. “He asked if I would like for them to come to Carolina, and I said, ‘yes.’”

Brady said Carolina Baptist Church has an Awana program, which is for children ages 2 to 6, and the Ugandan Thunder program is geared toward them.

“It gives them a cultural lesson,” he said. “It shows how big God is in the world we live in, and his love.”

Ugandan Thunder will be performing at the following churches:

Weather: ‘Much ado over nothing?’

Biting cold is expected to bring at least some snow flurries in Covington County in the hours before 9 a.m.... read more