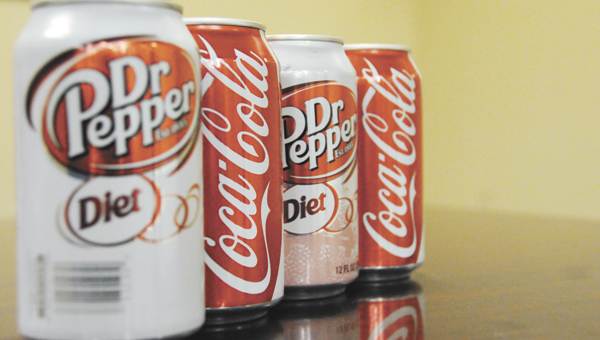 A new study foudn that higher risks for stroke and heart attack are among those who drink diet soda daily. | Andrew Garner/Star-News

Diet soda drinkers beware, even “diet” sodas could be bad for your health, a new study suggests.

The study, which was presented to the American Stroke Association’s International Stroke Conference in California on Wednesday, found that higher risks for stroke and heart attack are among people who drink it every day versus those who drink no soda at all.

Researchers studied about 2,500 adults in the New York area for 10 years, and those who drank soda every day had a 48 percent higher risk of stroke or heart attack than those who drank no soda at all.

Oddly, those who drank both diet and regular soda weren’t found to have any significant differences in risk.

Harvard neurologist and vice chairman of the conference said the finding should be “a wakeup call to pay attention to diet sodas;” however, the lead researcher cautions that this study is “too preliminary to suggest any dietary advice.”

Local dietitian John Newsom, who heads Andalusia Regional Hospital’s food and nutrition services, shared information from the American Dietetic Association, which only has limited evidence that non-nutritive sweeteners, which are used in diet sodas, have any impact on meeting dietary goals.

Newsom said that based on studies, alterative sweeteners may assist those trying to meet recommended dietary goals, and may even help preschoolers decrease the amount of non-preferred food they eat at meal time.

Still the question remains if non-nutritive sweeteners, which include saccharin, aspartame, acesulfame-K, sucralose, and neotame, found in soft drinks are safe.

Newsom said there is limited research on how these alterative sweeteners affect the general population.

“Considering the lack of high quality studies, continuing surveillance of the safety of (these) sweeteners is prudent,” he said.

Newsom said that based on available studies, these sweeteners do not affect appetite, hunger or fullness in adults.

Newsom’s findings are similar to the stroke association’s findings.

“This study suggests that diet soda is not an optimal substitute for sugar-sweetened beverages, and may be associated with a greater risk of stroke, myocardial infarction, or vascular death than regular soda,” the researchers said in the study abstract.

Still the actual accuracy of the research is unknown.

All of the information about how much soda was consumed came from the participants’ own reports, not from a controlled setting.

Therefore, researchers say, it’s possible participants did not correctly remember their habits or their habits were not consistent over time.

Additionally, researchers do not know what specific brands or flavors the participants used in diet and regular sodas consumed.

This is the first time diet soda has been linked to vascular events, but previous research has implicated it in other health issues.

A 2007 study in the American Heart Association journal Circulation found that people who drink one or more soft drinks a day are more likely to develop metabolic syndrome, a heart disease precursor, than people who drink less than one soda a day.

Still, that study also only showed an association, and did not prove that sodas cause metabolic syndrome. There could be something else about people who drink soda regularly that directly leads to risk factors for heart disease.