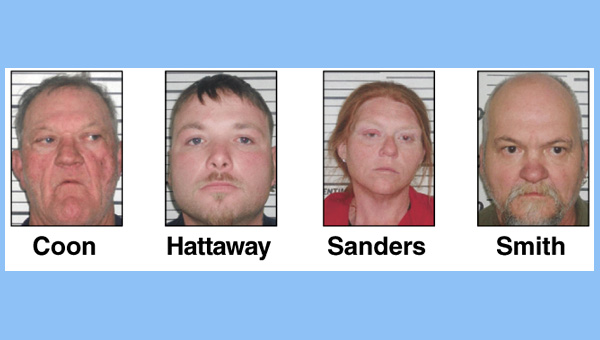 Seven people from the Florala area were arrested by Drug Task Force agents in the last two days – including four who were caught smoking meth.

“We’d received information of illegal drug activity going on at the home,” Harrell said. “And during our search, we recovered items such as methamphetamine and drug paraphernalia.”

Arrested at that location were Dennis Jefferson Sullivan, 41; Jeffery Kyle Sullivan, 21; and Audrie Taylor Hemphill, 18, all of Florala. Each wascharged with possession of a controlled substance, possession of drug paraphernalia and contributing to a minor and booked into the Covington County Jail under a $16,000 bond.

On Friday, agents traveled to a home on North Creek Road during an investigation into the manufacturing of meth, Harrell said.

“During our investigation it was concluded that Robert Coon, Randall Hattaway, Roy B. Smith and Grace Sanders were in the process of consuming meth that had been produced at the residence the night before,” he said. “Several items of evidence, which are associated with the manufacture, consumption and storage of methamphetamine, were located in the residence, along with some marijuana.”

Harrell said agents recovered the meth lab, which was located a quarter of a mile from the residence.

This is the second meth-related bust since December.

What would your heart say?