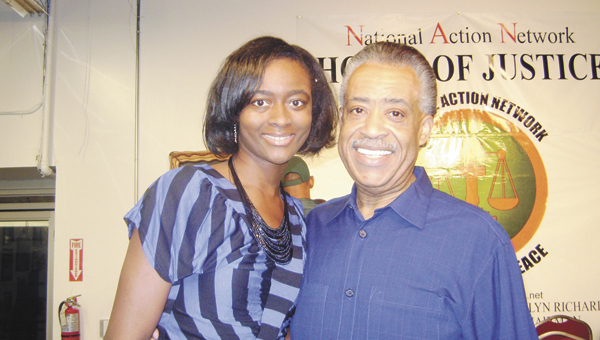 Andalusia singing sensation Debra Church is one more step closer to her dream of becoming a full-fledged recording artist, and residents will have an opportunity to see her live at the Andalusia Middle School Black History program Feb. 25.

Church performed Saturday on live national radio on Keepin’ It Real with the Rev. Al Sharpton, a syndicated Saturday morning radio program on the National Action Network in Harlem, N.Y.

The network’s mission is to work within the spirit and tradition of Dr. Martin Luther King Jr. to promote a modern civil rights agenda that includes the fight for social injustice and one standard of justice and decency for all people.

Church said her friend and filmmaker George Easley suggested that she contact the network to promote her song, “King Had a Dream.”

“I did,” she said. “I spoke with the Rev. Sharpton’s daughter, Dominique, who is the entertainment coordinator for the radio program, and she invited me to come out to perform the song and the rest is history.”

Church, who has seen fame for her song that pays tribute to the life and sacrifices of King, said it was important to her to sing the song on the show.

“It was extremely important for me to deliver the lyrics with power as well as bring the emotion of the song to life for the people,” she said.

Saturday was the first time Church has had the opportunity to sing on live radio.

“I had the wonderful experience of performing the song ‘King Had A Dream’ for the Rev. Al Sharpton and National Action Network,” she said. “He was very impressed with the song and enjoyed it very much. This was my first-ever national radio and livestream coverage, so I am extremely grateful.”

Church said she was very eager and excited for the performance.

“I could not wait to get up to the mic and sing this amazing song for such an amazing and respected group of people,” she said.

The 1994 Andalusia High School graduate currently lives in New York, where she teaches toddlers and is pursuing her musical career in her spare time.

Fishers upset over Pt. A fees