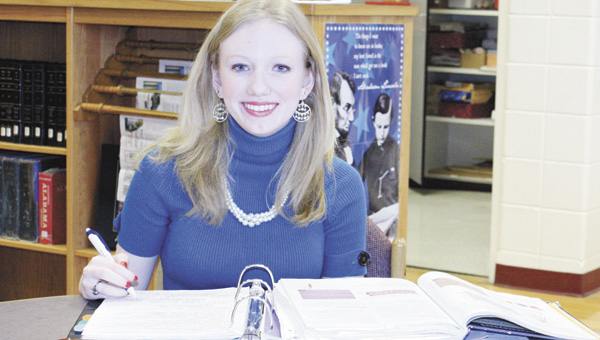 Spears found out Thursday she was one of 15,000 seniors recognized this year as a finalist.

“I had heard those who didn’t receive a rejection letter were golden,” she said. “And I didn’t get one.”

Spears will attend the University of Alabama in the fall and major in political science and Arabic.

“I’m really excited. That means pretty much everything is paid for,” she said. “All I have to pay for is a meal plan and my books.”

Spears was chosen from the nationwide pool of 16,000 semifinalists, which represents less than 1 percent of U.S. high school seniors, and was required to have an outstanding academic record throughout high school, be endorsed and recommended by her high school principal, among other things.

By attending the University of Alabama and studying abroad, Spears said it will allow her to pursue her goal of being an international lawyer or translator.

Spears said she’s extremely excited about the study abroad opportunity, which is a requirement for the international honors program at UA. She is also a member of the Honors College.

“I wanted to go to Egypt, but that’s probably not going to happen with all that’s going on over there,” she said, speaking of the political unrest in Egypt.

Spears said her next option would be to study abroad for a semester in Spain, which also has an Arabic learning center, but she doesn’t want to miss Crimson Tide football.

Spears said UA has up to intermediate levels of Arabic, but in order to advance her knowledge and familiarity with the language, the study abroad is needed.

“I want to maybe work in the government,” she said. “Do something that involves travel. I love to travel. Maybe international law or be a translator.”

And she’s making strides to become a translator. She has already taken French and Spanish and is in enrolled in German right now.

Spears is well on her way to earning her bachelor’s degree. When she graduates from AHS in May, she’ll have about 18 college credit hours, earned through dual enrollment classes.

Spears said she will start at UA in the fall and will room with fellow AHS classmate and friend Haley Moody.

“We are going to be staying in a nice suite-style dorm, where we each have our own individual room, but will share a bathroom,” she said.