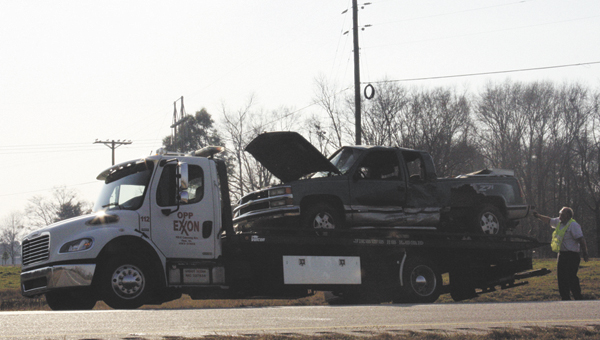 The occupants of this Chevrolet pickup truck were seriously injured Wednesday in a two-vehicle accident. | Stephanie Nelson/Star News

At least two people were seriously injured in a two-vehicle accident Wednesday near Horn Hill Road.

Preliminary reports indicated the Ford was driven by 23-year-old Justin Wiggins of Andalusia.

Additionally, the Chevrolet was occupied by the driver, 33-year-old Christy Jacobs of Opp, and an unidentified passenger.

Both Jacobs and her passenger were transported to Andalusia Regional Hospital for treatment, said an Alabama State Trooper spokesperson.

The spokesman said no other details surrounding the accident were immediately available.

The Alabama Department of Education has decided to postpone a measure that would phase out the current Alabama High School... read more