Congresswoman gets an ear full 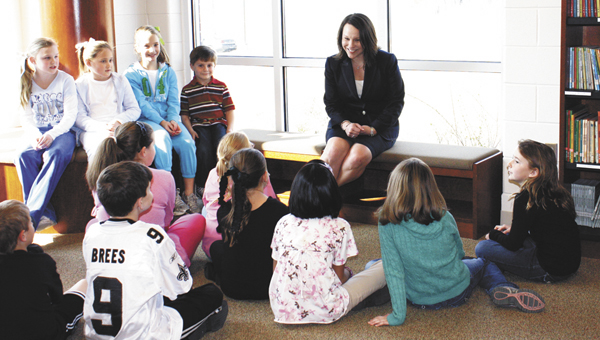 “You have a very special gift,” she said. “I always want to take note of what you have to say.”

Roby, who recently took a seat on the U.S. House of Representatives Education and Workforce committee, told teachers gathered in the school’s library, that there is a very partisan group of legislators working within the group.

“There are strong feelings on each side,” she said. “I believe that you in Opp, Ala., are in the best position to make decisions, not the bureaucrats in Washington.”

Roby told teachers her mission for the day’s visit was to listen to what they had to say.

“You are on the front line,” she said. “You are in best position to tell me what you need to be changed. We are going to look at No Child Left Behind soon.”

One teacher spoke up about everyone being concerned with funding and said that the extra received from the federal government is important to education.

Roby asked how much Title I funding the system receives and what percentage of students are on free and reduced lunches.

School officials said OES and Opp Middle School receive a combined $395,000 in Title I funding, and 60 percent of the student population receives free and reduced lunches.

Another issue brought to the table was special education funding.

Superintendent Michael Smithart said at one time, special education was supposed to be funded at around 40 percent, but said the system is currently being funded at between 19 and 20 percent.

School systems have an added expense of doing individualized education plans for students with disabilities.

“There are some schools who are known for their special education programs and their school still doesn’t meet AYP because they are tested on the same standards,” she said. “It is not right how the current system is. If we are going to have these expectations, we need to have adequate funding.”

Smithart said he believes that having to meet the accountability standards has made his school system work harder.

Third and fourth grade teachers said they felt that they were teaching to a test in preparing for the Alabama Reading and Math Test.

“Just ask the teacher in third and fourth grade to show you their ARMT specifications,” Smithart said. “It’s hanging over their heads.”

One teacher chimed in that the ARMT specifications better be in the teachers’ wallets or purses.

Other discussions centered on the control of federal money to allow local school systems to have more discretion for spending.

“I have been thinking of what we could have done with our federal money during proration, if we didn’t have all these guidelines,” said Emily Edgar, assistant superintendent. “We could have been creative.”

“I want to make sure parents, teachers and superintendents have a say in how the money is spent,” Roby said. “Everybody is getting cut, but I want to cut out bureaucracy, which will hopefully, put more money in classrooms.”

Roby said that there are many cuts coming.

“No programs are untouched,” she said. “There are cuts coming and it’s going to hurt. We have been looking at every program and we are making sure they are appropriate uses of money, and getting rid of wasteful uses.

“You sent us to Washington to make hard decisions,” she said. “We’re going to cut spending and cut regulations.”

No place to ‘go’ at lake

Where to go to go? That’s the question that many may ask when utilizing the Florala State Park in the... read more