Gas prices creeping back to ‘08 levels 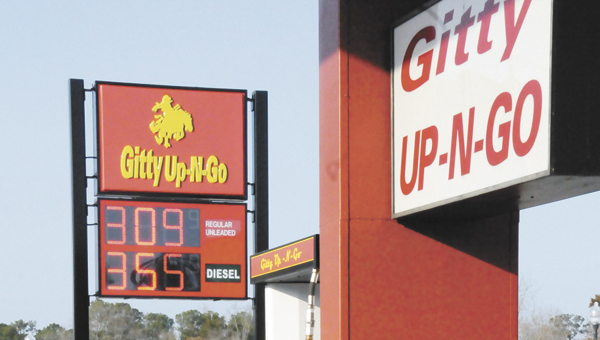 Gas prices across the world have increased this week to the highest levels seen since 2008, and Covington County prices are no different.

U.S. oil prices hit $100 a barrel Wednesday, driven by fears that instability in Libya will continue to harm that nation’s oil exports.

Prices have surged this week as protestors in Libya clashed with supporters of Moammar Gadhafi and even appeared to gain control of portions of the country.

The crisis has led to some oil companies halting production in Libya, and some analysts have predicted that it may push U.S. oil prices past the $115 per barrel mark this year.

“Prices are increasing partly due to a slight increase in demand, but mostly due to the anxiety created in the marketplace because of the situation in Libya,” said Clay Ingram, spokesperson for AAA Alabama. “While there has not yet been any disruption in the flow of oil out of that region, there is some potential for disruption. This potential is creating the anxiety, which is causing crude prices to jump considerably.”

Ingram said crude prices closed on Friday at $86 per barrel and Wednesday hit $100 per barrel.

“We have been expecting higher prices this year anyway, but the situation in Libya has the potential to cause more of an increase if it escalates or spill over into some of the surrounding countries,” he said. “But this has not happened yet.”

Ingram said he has received questions on whether gas will hit $5 per gallon this year and said it could be possible, but he does not see anything that would lead him to believe that will happen.

“In fact, we may not break the $4 per gallon (mark) this year, depending on what happens with this situation in Libya,” he said.

Nationally, the average price per gallon jumped to $3.19 this week, the most expensive since October 2008.

Locally, the average is slightly lower, but is still increasing.

The cheapest place to get gas in the county is in Opp at the BP on Cummings Avenue or Road Runner on 84 East, which is at $2.99 per gallon, according to AAA.

The most expensive place is $3.19 at the Corner Market in Andalusia.