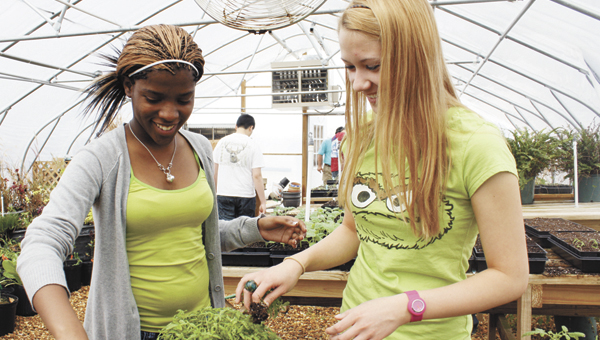 Life skills are an important part of everyday living, and Andalusia agriscience teacher Anthony Mikel is making sure that every student who enters his classroom has the opportunity to learn at least one of those skills.

Mikel said students learn everything from growing their own food to construction.

“One class is dedicated solely to transplanting plants,” he said. “That’s all they do.”

Right now, the class is transplanting tomatoes and different types of lettuce, including roma tomatoes and romaine lettuce.

“I teach them greenhouse production,” Mikel said. “I center on vegetables, so they can learn to grow their own food and maintain it.”

The students grow their own food from seeds to transplanting them into the school’s garden.

“Basically, I teach them how to sustain themselves,” he said. “We make the tomatoes and other vegetables and we sell them.”

Mikel said it’s a good lesson to learn, especially with tomatoes prices inching above $50 a case.

Many of the 220 students enrolled in Mikel’s agriscience or co-op classes say they appreciate the skills they are learning and are taking note.

“We planted (the whole crate) in seeds and when they grew, we separated them,” said Rob Maddox. “Now we have planted them separately.”

Brandee Phillips, who is new to ag classes, said that she has learned a lot about how to plant vegetables.

Two-year ag student Wesley Maye said the classes have helped him learn a lot about plants.

“I learned about a bunch of different plants I never heard of,” he said. “I wasn’t interested in plants before I took ag, but I’ve thought about planting more stuff on my own.”

Maye is responsible for shaking the tomato plants to help them grow.

“When you shake them it, spreads the soil out and it makes them grow more,” he said.

“The process helps pollinate the plants,” Mikel said. “We also have fans that run all the time and they help pollinate as well.”

Mikel said the students will begin selling the plants in March.

Additionally, students learn the basics of woodworking and construction.

“They learn to frame things out,” he said. “How to put on roofs, electricity, tile, cabinet making and general construction.”

Mikel said the students build items ranging from grills to fish cookers and other items and sell them.

“We built a grill for Mississippi State University,” he said. “And we’ve had requests from other universities to do the same.”

Mikel also teaches two types of welding to give a foundation for those who may be interested in pursuing a career as a welder.

“I just give them the basics, so they can go on to MacArthur or Reid State,” he said.

Mikel also said that 33 students utilize the co-op program through the Future Farmers of America, which is currently celebrating FFA week.

“That’s a large program,” he said. “And we have students in a variety of career fields, including fashion, fast food, vet offices and golf courses. The goal is to teach students the importance of getting a job.”

If that’s not enough, Mikel said he’ll even teach his students to drive a tractor.

“Andalusia is a city, but we’re still in a rural area, but you’d be surprised at how many students have never been on a tractor,” he said.

Despite the success of the program, Mikel doesn’t take any credit.

“The kids do a good job,” he said. “They make this program what it is. I just call myself a good motivator.”